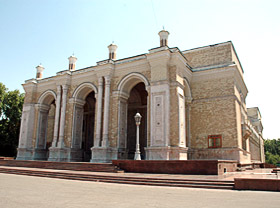 At the end of the talks, the governments of Uzbekistan and Japan signed exchange notes in the framework of the Japanese government’s cultural assistance program, UzA reported.

In accordance with the document, Japan will allocate JPY 33.2 million (almost US$330,000) for the project of improvement of the lighting and audiovisual equipment of the Alisher Navoi State Academic Theater of Uzbekistan in Tashkent.

On 3 February, President of Uzbekistan signed a resolution on the effective use of the grant of the government of Japan, issued for the provision of the theater with special equipment.

“The signed document will serve to further development of cooperation between Uzbekistan and Japan in the field of culture,” Ambassador Tsutomu Hiraoka said.