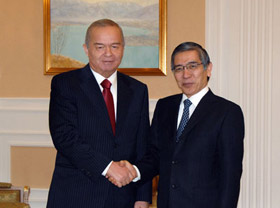 As earlier reported, Haruhiko Kuroda arrived in Uzbekistan to get acquainted with preparation to 43rd ADB’s Annual Meeting, which will take place in Tashkent on 1-4 May 2010. Around 3,000 delegates - including government leaders, central bank governors and finance ministers as well as representatives from academia, the media and civil society groups - are expected to attend the meeting. The 2010 gathering marks the first time the ADB has held its Annual Meeting in Central Asia.

Uzbek President Islam Karimov underlined that Uzbekistan is actively interacts with many authorized international financial institutions, but pays special attention to expanding cooperation of the ADB.

During the meeting, the sides exchanged opinion on further strengthening of collaboration and other issues of mutual interest.

ADB, based in Manila, is dedicated to reducing poverty in the Asia and Pacific region through inclusive economic growth, environmentally sustainable growth, and regional integration. Established in 1966, it is owned by 67 members – 48 from the region. Uzbekistan joined ADB in 1995 and since that time has received 30 ADB loans totaling $1.29 billion and technical assistance of $40.75 million.