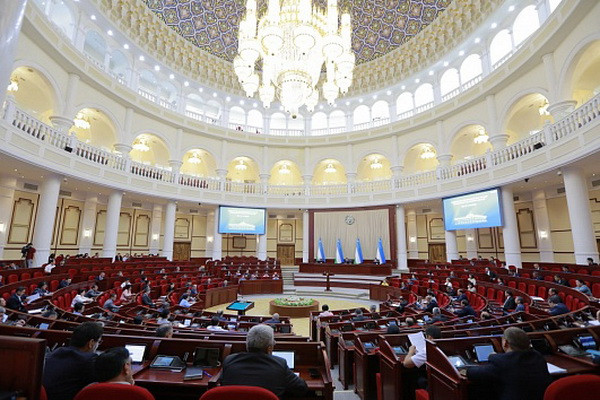 J. Shirinov, Chairman of the Committee of the Lower House of Parliament on Combating Corruption and Judicial-Legal Issues, spoke on this issue of the agenda.

It was noted that the main goal of our Constitution is to create appropriate conditions for the prosperous life of our people. The Constitutional reforms being carried out in the country today are based on a noble idea aimed at glorifying human dignity. Since Uzbekistan, when carrying out constitutional reforms, is guided by the interests of the people.

The essence and significance of the draft Constitutional Law, submitted before 1 August for nationwide discussion, are aimed at consolidating as a constitutional norm the principles of "man - society - state" and "New Uzbekistan - a social state", the creation of a people’s state, the protection of human rights and strengthening social protection. After all, each article of our Basic Law should become a program document and a rule of life for every citizen.

Therefore, in the course of the nationwide discussion of the draft law, the Constitutional Commission and responsible committees carried out significant work to further improve the Basic Law. In particular, about 20 thousand discussion events were organized in ministries, departments and organizations, in all regions and cities of the republic with the participation of deputies and senators of the Oliy Majlis, political parties, deputies of local Kengashes.

Young people, teachers, medical workers, entrepreneurs, representatives of civil society institutions, all our compatriots who are not indifferent to the fate of our country, having shown activity, took part in the discussion of the draft law and made their proposals. Thus, more than 150,000 proposals were received within the framework of the nationwide discussion.

Among the incoming proposals of citizens - the state should end unemployment, taxation should be carried out in accordance with the principles of justice, the state, if necessary, should provide legal and other assistance to citizens abroad, labor rights should be protected by the state, ensuring equal rights for women and men, youth issues should become one of the most important tasks of state policy, justice should be carried out only by the court and other proposals are becoming relevant. This, in turn, indicates that the bill is adopted on the basis of the proposals of our people, and the Basic Law literally becomes the people’s Constitution.

The draft law was also discussed at joint meetings of the Committees of the lower house of parliament on combating corruption and judicial and legal issues, on democratic institutions, non-governmental organizations and self-governing bodies of citizens, as well as at meetings of factions of political parties.

In addition, during the nationwide discussion, meetings of responsible committees were held about 40 times with the participation of specialists, experts, the public, and media representatives. Meetings were also organized to discuss the most relevant proposals with the direct participation of the authors themselves. Moreover, online work was carried out remotely with the authors of proposals located in remote areas. This allowed the people of Uzbekistan to take an active part in national discussions and express their opinion on the constitutional reforms.

Along with this, in order to bring the essence of the Constitutional reforms to foreign political circles and leading experts at a high level, conferences, round tables and other events were organized in countries such as the USA, Great Britain, Switzerland, Poland, Japan, Korea, India, Saudi Arabia . The experts who took part in these events highly appreciated the ongoing constitutional reforms in the country, made their proposals and supported the path of Uzbekistan in this direction.

Currently, each proposal and the results of the examination are discussed in detail and comprehensively with the participation of experts, specialists, scientists and politicians. Responsible committees study and analyze them in depth, work to reflect the relevant ones in the draft Constitutional Law.

People’s deputies, noting the work carried out by the Constitutional Commission and responsible committees, stressed that our people make many well-founded proposals that require in-depth analysis, which cannot be ignored or treated superficially.

Along with this, the deputies discussed the still occurring problem of “demolition”, what new proposals were received to solve it, ensure the inviolability of property, and how they will be reflected in the draft Constitutional Law. In addition, questions were raised on the proposals received on ecology and environmental protection, rational use of natural resources.

At the meeting, it was noted that on the basis of proposals received from citizens, a number of new norms are being introduced into the draft law, when the text of the draft is ready, it will be submitted for discussion by deputies, after which, taking into account the opinions of people’s representatives, the draft Constitutional Law will be submitted to a referendum.

Also, the responsible committees were tasked to complete the work on further improvement of the project, taking into account the proposals and comments received at the national discussion and meetings of the factions and by attracting well-known scientists and leading experts.

It was emphasized that it is necessary to ensure the consideration of proposals and comments on the draft Constitutional Law, which will be received in accordance with the Law “On Appeals of Individuals and Legal Entities”, to take measures to organize this process on the principles of openness and transparency, as well as to submit the finalized draft Constitutional Law to the deliberations of the Legislative Chamber.

At the meeting, J. Shirinov’s information on the results of the nationwide discussion of the draft Constitutional Law and the ongoing work to improve it was taken into account.