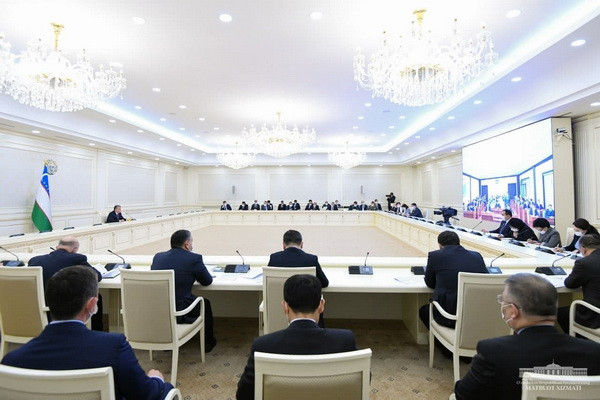 Tashkent, Uzbekistan (UzDaily.com) - On 13 April, a video conference was held under the chairmanship of President Shavkat Mirziyoyev on the implementation of tasks to ensure employment and meaningful organization of youth leisure.

The 2021 year has been declared in our country as the Year of Supporting Youth and Strengthening the Health of the Population, and a corresponding state program is being implemented. Important tasks in this direction were also outlined at the meetings of 27 January and 10 February 2021, specific responsible persons were identified.

At today’s meeting, the progress of these tasks, the state of work with youth carried out by ministers, khokims of regions, districts and cities, heads of sectors and rectors of universities were considered.

The country’s "youth notebook" includes 648 thousand unemployed, of which 283 thousand were employed in the first quarter. In particular, 45 thousand hectares of land have been allocated to 175 thousand young people.

For the meaningful organization of youth leisure, an additional 36 thousand circles have been organized, to which about 874 thousand boys and girls are attracted. As part of the Five Important Initiatives, 97,000 art and sports equipment, computers and 562,000 fiction books were donated to educational institutions, libraries and training centers.

At the same time, in some regions and spheres, youth issues are not given sufficient attention. So, in Andijan region in the first quarter, only about 5 thousand young people were provided with permanent jobs. At the same time, there are currently 7 thousand vacancies at industrial enterprises and clusters of the region.

There are also shortcomings in training unemployed youth in professions and entrepreneurship, providing them with finance. In particular, under the "1 + 1" program, it was planned to train 100 thousand young people with further provision of soft loans to them, but the territorial structures of the Chamber of Commerce demonstrate their inability to systematically organize this work.

In addition, in Surkhandarya region, out of the total number of unemployed youth, only 30 percent are employed, which is the lowest indicator in the country. The "1 + 1" project covers only 16 people in Khodjeyli, 27 - in Furkat, 78 - in Ulugnor, 82 - in Angora districts.

At the meeting, such low rates were sharply criticized. For improper organization of work with youth, the deputy khokim of the Surkhandarya region for youth policy, the khokims of the Furkat and Ulugnor regions, the heads of some sectors in the Shafirkan, Kamashin, Khiva, Chust, Khodjeyli and Angora regions will be dismissed. A stern warning was announced to a number of other responsible persons and time was allotted to correct the situation.

Measures have been identified to implement immediate tasks and expand measures to support youth.

- The most important task is, first of all, to provide employment for young people, to create conditions for them to receive a decent income. Entrepreneurship, especially small and medium-sized businesses, is our greatest opportunity and resource in this direction, said Shavkat Mirziyoyev.

In this regard, the responsible persons have been tasked with further expanding measures to support youth entrepreneurship and introducing new mechanisms for ensuring employment. A number of benefits have been announced for both unemployed and start-up entrepreneurs and employer organizations.

Graduates of vocational training centers hired for the first time will be exempt from income tax for up to 6 months.

Entrepreneurs who have employed more than 5 unemployed from the "youth notebook", from 1 May, will receive a discount of up to 50 percent when renting state property.

Also, young people who rent a building and start their own business will be reimbursed up to 30 percent of the annual rental payments.

The expenses of youth from the corresponding "notebook" and pupils of orphanages for driving training and passing a month’s military service will be paid from the budget.

Also, from 1 June, compensation will be established for part of the expenses of members of the "youth notebook" for the study of foreign languages and general subjects in non-state educational institutions.

From 1 July, subsidies of up to 1 million soums will be provided to private enterprises for the retraining of newly hired workers.

In addition, the amount of the contract paid for the education of young people in vocational schools and technical schools will be exempt from income tax.

Another important area that contributes to youth employment is agriculture. Today from 2 thousand to 4.5 thousand young people in 21 regions of the country received land plots for agriculture.

The head of state emphasized the importance of providing these young people with practical assistance from farmers and clusters before young farmers carry out agricultural activities and begin to receive income.

It was noted that in support of the participants in the "youth notebook" it is necessary to provide them with subsidies in the amount of up to 2 million soums for the purchase of seeds and seedlings.

The Ministry of Finance was instructed to create an electronic platform for the transparency of the granting process.

Another problem is the need to increase the number of qualified mid-level health workers in order to provide every mahalla and family with quality medical services. Medical teams alone require at least 7,000 mid-level workers.

In this regard, in continuation of the initiated reforms in health care, the need to create new jobs for thousands of young people was emphasized by introducing an additional 20 thousand staffs of mid-level medical workers and social workers this year.

Today the children’s centers "Barkamol Avlod" cover only 175 thousand children. The task was set to fully use the potential of these institutions, to increase coverage by creating their branches in each school.

Work will be consistently continued to attract young people to sports, culture and art, to hold various festivals and competitions, and to prepare for prestigious international competitions.

The head of state stressed that each university should be a center of spirituality and culture for the nearest makhallas, in which the participation of rectors is not felt at all.

The issue of students’ living conditions is considered separately.

Today more than 130 thousand students are renting housing. The government is preparing a special program on this issue. According to it, from 1 May, it is planned to compensate students for half of the rent. At the initial stage, this system will cover 60 thousand young people. At the same time, low-income students will be reimbursed for these expenses from the funds of khokimiyats and universities.

The reports of the responsible persons were heard on the issues discussed at the meeting.