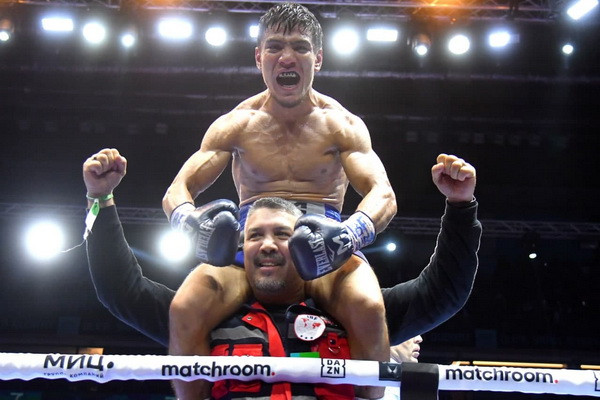 Boxers of Uzbekistan once again proved their superiority

Boxers of Uzbekistan once again proved their superiority

Tashkent, Uzbekistan (UzDaily.com) -- The long-awaited evening of professional boxing, which was held for the first time in Tashkent, has come to an end. It should be especially noted that all eight boxers, who performed at the Humo Arena, defended the honor of Uzbekistan with dignity, having won victories.

We can say that the ice arena "Humo Arena" today truly embodied all the power and potential of Uzbek boxing. In the lobby and outside of the complex, visitors could see exhibits and attributes reflecting the glorious history of boxing in our country, as well as information and information about the stars of this sport. The honored guests of the boxing evening were Deputy Prime Minister of the Republic of Uzbekistan Aziz Abdukhakimov, President of the International Boxing Association (AIBA) Umar Kremlev, President of the Asian Boxing Confederation Anas Alotaiba. Before the start of the battles, they examined the capabilities of the ice palace.

Aziz Abdukhakimov spoke at the opening ceremony, noting that in our country, under the leadership of our esteemed President, great attention is paid to the development of sports, in particular, boxing. It should be noted that such a prestigious competition was organized for the first time in Central Asia.

The fights began very successfully for the Uzbek boxers, in particular, Ikboljon Kholdorov was the first to perform and knocked out his opponent. Then Sanzhar Tursunov, Mirazizbek Mirzakhalilov, Khasanboy Dusmatov, Bakhodir Jalolov, Isroil Madrimov, Shahram Giyasov and Murodjon Akhmadaliev presented their victories to millions of fans. In the central fight, Murodjon Akhmadaliev was able to adequately defend his WBA and IBF belts, knocking out Ryosuke Iwasu (Japan). Results of tonight boxing evening: