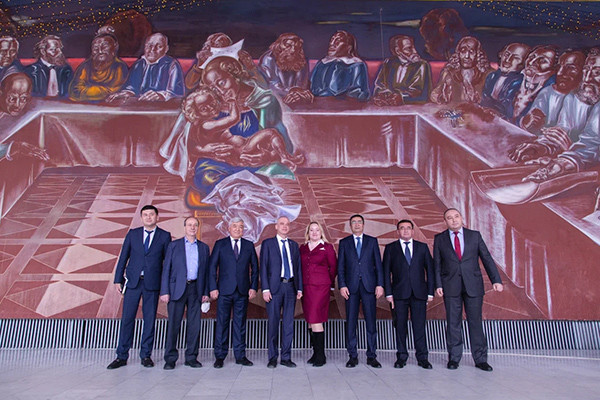 Tashkent, Uzbekistan (UzDaily.com) - A delegation of Uzbekistan paid a working visit to the Russian National Research Medical University named after V. N.I. Pirogov to discuss issues of cooperation in the field of science and education. In particular, the parties touched upon the topic of organizing a branch of the University in the city of Jizzakh (Uzbekistan).

The delegation was headed by the Minister of Health of Uzbekistan Abdukhakim Khadjibaev. RNIMU them. N.I. Pirogov was represented at the meeting by the University leadership, headed by the rector, academician of the Russian Academy of Sciences Sergei Lukyanov.

Deputy Minister of Health of the Russian Federation Tatyana Semenova noted that the two friendly states have long been working to strengthen relations in various fields, including in the exchange of educational technologies and new achievements.

“We have a task to bring productive interaction with educational organizations of the Uzbek side to the maximum point as soon as possible by opening a joint university: a branch of a Russian university on the territory of Uzbekistan. On the Russian side, a university was chosen to solve these problems, which today welcomes us hospitably: the Russian National Research Medical University named after N.I. Pirogova, my alma mater. This is one of the leading universities not only medical, but in general in our country. It effectively solves all three tasks assigned to medical higher schools: training of specialists at all its levels (from secondary education to postgraduate training), scientific research, which is translated into practical health care within a complete cycle, and a medical component, which, on the one hand, provides broadcast and, on the other hand, ensures the provision of specialized high-tech medical care to all citizens of the Russian Federation,” Tatiana Semenova said.

In turn, the Minister of Health of Uzbekistan thanked for the warm welcome and recalled that the Russian Federation and the Republic have long-standing and close cooperation, especially in the field of medicine: , and educational. We know that many Russian medical universities, and above all RNRMU named after V.I. N.I. Pirogov, are at the most advanced frontiers, and are recognized not only in Russia, but throughout the world. It is very important for us to cooperate with such a university”.

Sergey Lukyanov told the guests about the history of the Russian National Research Medical University named after N.I. Pirogov, his formation, the current state of affairs and development prospects. In particular, in the report, he paid detailed attention to the separate structural divisions of the University, where active research and clinical activities are carried out, the work of the international faculty and the "Double Diploma" program, the scientific activities of the institutes of the Russian National Research Medical University.

“This will be a new branch in which we must develop new approaches to classical systemic medical education, creating specialists of new formats. And this particular university is as ready as possible for such innovations today,” Tatiana Semyonova emphasized.

During the visit, representatives of the delegation were given an excursion around the University. The guests visited the Multidisciplinary Accreditation and Simulation Center, where they got acquainted with the principles of training healthcare professionals on the most advanced medical simulators, the work of a developed telemedicine network, and the use of virtual reality technologies for personnel training. In addition, they examined the phantom classroom of the Department of Therapeutic Dentistry of the Faculty of Dentistry, and also saw how Russian graduates undergo accreditation to carry out medical activities.

“After the presentation, I no longer have doubts that we are moving on the right path, that we have identified the right partner,” said the Minister of Health of Uzbekistan, Abdukhakim Khadjibaev, “I am sure that when the branch opens, there will be people not only from Jizzakh region, but also from Tashkent, Samarkand and other regions of the country. I have no doubt that there will be a big competition for admission. "

At the end of the visit, representatives of the Russian National Research Medical University named after N.I. Pirogova and the delegations expressed hope for further strengthening of fruitful cooperation.