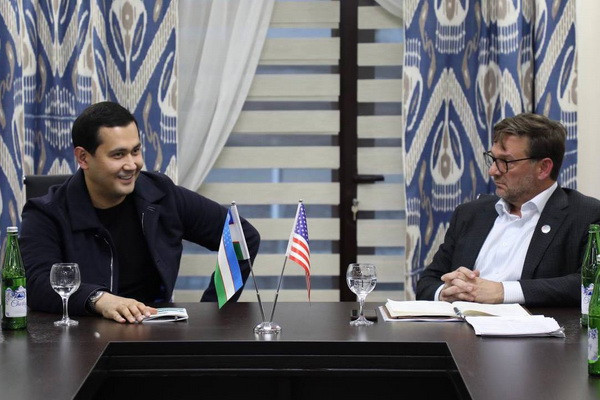 In Pakhtakor district, a meeting was held with the director of the Silverleaf company (USA) Dan Patterson, during which the activities of the functioning cotton-textile cluster were discussed. During the conversation with the participation of the regional and district authorities, practical issues related to the production activities of the cluster were comprehensively considered, methods of increasing yields and prospects for further expanding the activities of an American investor in Uzbekistan by increasing production volumes and increasing the added value of products through the use of advanced American technologies were discussed.

Effective mechanisms have been developed to resolve existing issues, and further steps have been outlined to support the development of the cluster.

During the visit to Dustlik district, with the participation of heads of industry departments and associations, commercial banks and local authorities, measures for accelerated socio-economic development of the district were discussed.

It was announced that the task was set to transform Dustlik district into an "innovation district" by forming new investment projects aimed at the widespread introduction of innovations in various areas of agriculture, industry and the social sphere.

Responsible managers presented the intermediate results of the work done, presented promising project proposals and shared their vision of solving the task in the context of industries.

During the consideration of the ideas and proposals presented, separate comments were made regarding the need to apply a systematic approach to the analysis of current problems and the development of project proposals that ensure the maximization of the economic effect from the investments being made.

The importance of taking into account the energy efficiency and economy of the implemented innovative solutions, as well as their impact on the growth of production capacity and the development of interconnected industries, was noted.

It was also indicated that it is promising to use the potential of youth in the development of new ideas and proposals for the use of innovations in various areas of the socio-economic development of the region.

Based on the results of the discussion, the members of the working group were given targeted instructions to accelerate the implementation of the tasks set and ensure concrete results in the shortest possible time.