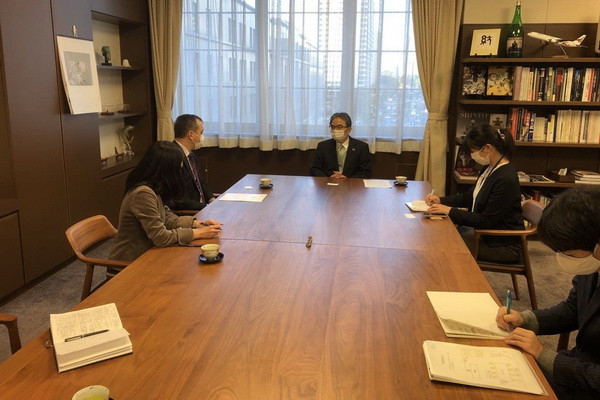 Tashkent, Uzbekistan (UzDaily.com) -- The Embassy of Uzbekistan in Tokyo held a meeting with the new head of the Agency for Culture of Japan Ryohei Miyata, during which issues of enhancing cooperation in the field of culture and art were discussed.

During the meeting, it was emphasized that within the framework of the official visit of the President of the Republic of Uzbekistan Shavkat Mirziyoyev to Japan in December 2019, the Uzbek and Japanese sides expressed their readiness to intensify cultural and humanitarian cooperation, including a joint celebration in 2022 of the 30th anniversary of the establishment of diplomatic relations between our countries and the Year of Culture.

R. Miyata noted that he first visited Uzbekistan in 2002 together with the rector of the Tokyo University of Art, the famous artist and public figure of Japan Ikuo Hirayama in the framework of the creation of the Caravanserai of culture in Tashkent. Since then, he has warm feelings for the culture and art of Uzbekistan. He, being a craftsman, personally always admires the folk applied art of the Uzbek people.

According to R. Miyata, the beautiful building of the Bolshoi Theater named after Alisher Navoi in Tashkent became a symbol of friendship and close cultural communication between the Japanese and Uzbeks.

The head of the Agency stressed that the celebration of the 30th anniversary of the establishment of diplomatic relations is an important date for Japan and Uzbekistan. In this context, R. Miyata expressed his readiness to assist in holding cultural events in the two countries.

Following the meeting, an agreement was reached to continue working contacts with the Cultural Agency of Japan and interaction in order to work out all the discussed issues in the field of cultural cooperation.