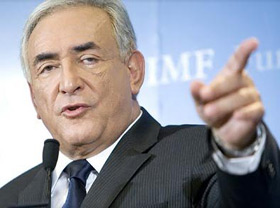 Tashkent, Uzbekistan (UzDaily.com) -- IMF Managing Director Dominique Strauss-Kahn will tour Central Asia in mid-June. It is that the visit took place on 15-18 June 2009.

Dominique Strauss-Kahn will visit Kazakhstan, Tajikistan, the Kyrgyz Republic and Uzbekistan during his trip to the region.

Dominique Strauss-Kahn assumed office as the tenth Managing Director of the International Monetary Fund on 1 November 2007. Upon being selected by the IMF’s Board of Executive Directors, Mr. Strauss-Kahn indicated that he will press ahead with reform of the 185-member country institution that helps oversee the global economy.

Prior to taking up his position at the IMF, Mr. Strauss-Kahn was a member of the French National Assembly and Professor of Economics at the Institut d’Etudes Politiques de Paris. From 2001 to 2007, he was reelected three times to the National Assembly, and in 2006, he ran for the Socialist Party’s nomination for the French presidential election. In 2000 and 2001, he taught economics at the Institut d’Etudes Politiques de Paris and was named visiting professor at Stanford University. He was also a personal advisor to the Secretary General of the OECD.

Earlier, Mr. Strauss-Kahn served as Minister of Economy, Finance and Industry of France from June 1997 to November 1999. In this capacity, he managed the launch of the Euro. He also represented France on the Board of Governors of a number of international financial institutions, including the IMF.

Between 1993 and 1997, he was in the private sector as a corporate lawyer. From 1991 to 1993, Mr. Strauss-Kahn served as Minister of Industry and International Trade, during which time he participated in the Uruguay Round of trade negotiations.

Mr. Strauss-Kahn began his career as assistant professor, then professor of economics at the University of Paris where he was tenured in 1978. He was then appointed Deputy Commissioner of the Economic Planning Agency (1981-1986). He was elected Deputy (Member of Parliament) to the National Assembly (1986), where he chaired the Finance Commission from 1988 to 1991.

Mr. Strauss-Kahn holds a PhD in economics from the University of Paris. He also graduated in law, in business administration, in political studies, and in statistics. As an academic, his research fields include household saving behavior, public finance, and social policy.

A French national, Mr. Strauss-Kahn was born in Neuilly-sur-Seine, France, on 25 April 1949 and spent his early years in Morocco.