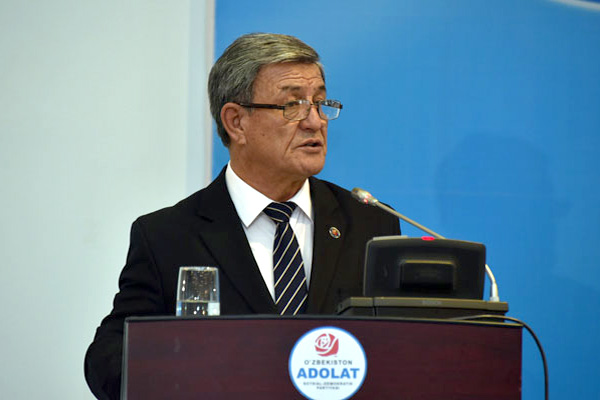 The meeting, which took place in the format of video conference, was opened by the chairman of the Qoraqalpoghiston council of the Adolat Social Democratic Party of Uzbekistan, Ye.Kunnazarov.

Rutarboyev, authorised representative of the candidate, familiarized those gathered with his biography.

Candidate for President of the Republic of Uzbekistan Narimon Umarov made a speech about his electoral programme.

In the years of independence, the Republic of Qoraqalpoghiston is developing steadily alongside all the other regions of the country. The wellbeing of the region’s population is increasing. Such industrial facilities as the Kungrad soda plant and the Ustyurt gas-chemical complex, which are among the biggest such industrial enterprises not only in the region but also in the world, are making an important contribution to the economic development of the country.

In the electoral programme of the candidate, special attention is paid to such topical tasks as building a democratic social state and a fair civil society, transition to an innovative economy, conducting a strong social policy, including further raising the level of the provision of the population with quality medical services, education and housing.

The candidate has spoken out for consistently continuing projects and programmes directed towards resolving the region’s ecological problems that were consequences of the Aral Sea’s shrinking, and for ensuring sustainable development on the basis of eco-friendly technologies and an ecologically clean environment through processing industrial waste.

Resolving ecological problems is one of the priorities of the state’s socio-economic policy. Therefore, the candidate has proposed working out and implementing a special programme for the comprehensive development of this sphere with precise mechanisms for ensuring environmental protection through reducing emissions from industrial enterprises and expanding tree plantations as well as creating green belts in suburban areas and territories adjacent to industrial enterprises.

The director of specialized state boarding school for blind children and those visually impaired No 10 under the Ministry of Public Education of the Republic of Qoraqalpoghiston, N.Kaypbergenov the leader of the Qoraqalpoghiston regional department of the Ecosan international public charity foundation, N.Mirzamuratov the dean of the primary education faculty of the Nukus state pedagogical institute U.Seitzhanova, the chairman of the “Okzhap” steppe village citizens’ gathering in Shumanay Disrict K.Ubaydullayev and others expressed their opinions on the electoral programme of the candidate and said that preparations for the elections in the country completely conformed to the national legislation and universally-accepted international norms. They called on voters to take an active part in the forthcoming 4 December 2016 elections of President of the Republic of Uzbekistan.