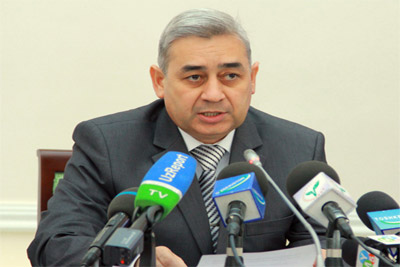 The meeting, which took place in the format of video conference, was opened by a deputy of the Legislative Chamber of Oliy Majlis (parliament) of the Republic of Uzbekistan, A.Kirgizboyev.

The authorised representative of the candidate, H.Yeshimbetov, familiarized those gathered with his biography.

Candidate for President of the Republic of Uzbekistan Hatamjon Ketmonov made a speech about his electoral programme.

He said that as a result of large-scale reforms implemented in the years of independence under the leadership of the country’s First President, the Republic of Qoraqalpoghiston turned into a region with dynamic industrial development. Specifically, the Kungrad soda plant, the Ustyurt gas chemical complex, the Khojeyli glass factory, the Kungrad carbide plant, the Nukus marble and cable plants were built and commissioned. They play an important role in the economic development of the country.

The candidate noted that his electoral programme includes such noble goals for resolving the main strategic task that is Uzbekistan’s joining the ranks of developed democratic states and taking up a worthy place in the world community, as adherence to national interests, the keeping and strengthening of the country’s independence, the ensuring of the Motherland’s prosperity, peace and the people’s wellbeing, civil and interethnic accord and social stability.

Special attention is paid in the programme to such important issues as expanding the network of rural medical stations, tightening systemic control over the implementation of legislative acts regulating the provision of qualified medical aid on a preferential basis and for free, tightening state and public monitoring over the work of pharmaceutical enterprises and pharmacies as well as over prices for medicines and limiting the advertising of medicines.

The head of the faction of the Uzbekistan People’s Democratic Party in the Jokarghi Kenes of the Republic of Qoraqalpoghiston and director of the Nukus branch of the Tashkent state agrarian university, Ye.Tureniyazov; the chief editor of the Qoraqalpoghiston Ovozi newspaper, Sh.Ayapov; the head teacher of general education school No 70 in Khojeyli District, A.Orinboyeva; a master’s degree student of the Berdaq Qoraqalpogh state university, G.Seytnazarova; and others expressed their opinions on the electoral programme of the candidate. They said that the process of preparation for the elections completely conformed to the national legislation and universally-accepted international norms. They called on voters to take an active part in the forthcoming 4 December 2016 elections of President of the Republic of Uzbekistan.