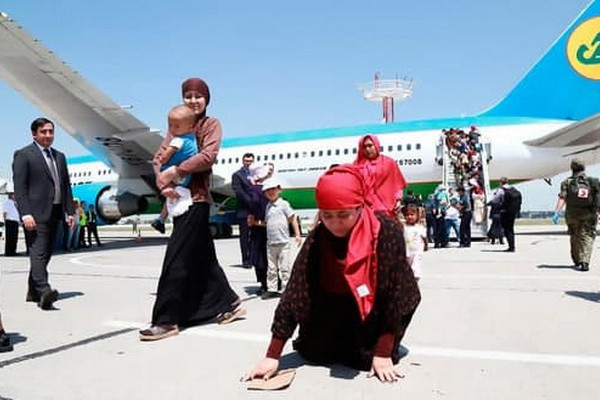 Tashkent, Uzbekistan (UzDaily.com) -- Some 434 women and children from Syria and Iraq returned to their native land, Uzbekistan. This experience was presented during the 47th Regular Session of the UN Human Rights Council in Geneva.

The speech of representatives of Uzbekistan on this issue took place on July 5, 2021, within the framework of the event on “Rehabilitation and reintegration of women and children repatriated from Syria and Iraq”.

“Our country attaches great importance to this issue. Thus, since 2019, the authorities have carried out 5 operations that have returned home a total of more than 530 people, mostly women and children. These operations were not suspended even during the pandemic – the last of these operations was carried out at the end of April this year”, Ulugbek Lapasov, Permanent Representative of Uzbekistan to the UN Office and other International Organizations in Geneva, said in his speech.

The Government of Uzbekistan has created special working groups to rehabilitate the repatriates. This was noted in the speech by the First Deputy Speaker of the Legislative Chamber of the Oliy Majlis, Director of the National Center for Human Rights of the Republic of Uzbekistan Akmal Saidov. These groups are assigned the tasks of rehabilitation, restoration of documents, employment, placement in school and preschool institutions, determining guardians for orphaned children or their placement in state social institutions, monitoring the health and psychological state of those who were returned to their homeland.

“In addition, surgical operations were performed for needy repatriates. Children whose parents were killed in Syria and Iraq have been assigned guardians from among relatives. Upon completion of rehabilitation measures, the repatriates were escorted to places of permanent residence, where, with the coordination of state bodies and public institutions, a set of measures for their social adaptation and inclusion in society was organized”, A. Saidov said.

Uzbekistan's efforts to repatriate and rehabilitate women and children, its leading role in this direction was emphasized during the meeting by the UN Special Rapporteur on the promotion and protection of human rights and fundamental freedoms while countering terrorism, Fionnuala Ní Aoláin. She noted that currently about 70,000 women and children associated with ISIS are being held in the al-Hol and Roj camps in north-eastern Syria. And only some States are fulfilling their international obligations regarding the repatriation and rehabilitation of women and children.

The participants of the international meeting noted that the program implemented by Uzbekistan regarding the repatriation of its citizens can serve as an example for many countries whose citizens are still in refugee camps in Syria and Iraq, and is also accepted as an exemplary work in the field of ensuring human rights.