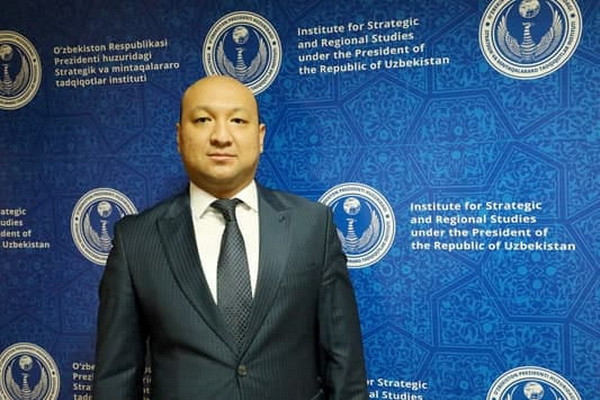 Tashkent, Uzbekistan (UzDaily.com) -- Over the years, under the leadership of the President of Uzbekistan Shavkat Mirziyoyev, comprehensive measures of unprecedented scale and significance have been carried out in the field of solving environmental problems. Measures to solve problems associated with the consequences of the drying up of the Aral Sea are outlined as the most important priorities in this direction.

All this is gaining great urgency and relevance in the context of global climate change and worsening environmental disasters. Today, there is a growing understanding in the world that the negative changes associated with the Aral Sea catastrophe pose a serious threat not only to the countries of Central Asia, but also to sustainable development on a global scale.

As you know, the area of the dried bottom of the Aral Sea is 4.5 million hectares, including on the territory of Kazakhstan - 2.2 million hectares, Uzbekistan - 2.3 million hectares. Annually, up to 100 million tons of salt dust is removed from the seabed, which is carried over thousands of kilometers, causing irreparable damage to the health of the population, nature and economy of the region.

In this regard, fundamental changes were envisaged in approaches to solving the problems of the Aral Sea in the Action Strategy for five priority areas of development of the Republic of Uzbekistan for 2017-2021. In particular, systemic measures were outlined to mitigate the negative consequences of global climate change and the drying up of the Aral Sea for the development of agriculture and human life.

Already on 18 January 2017, within the framework of the implementation of these tasks, the State Program for the Development of the Aral Sea Region for 2017-2021 was adopted. In the same year, the Aral Sea Region Development Fund was established to provide reliable and stable financing. An important step in this regard was the implementation of 67 projects worth almost US$800 million, aimed at mitigating the consequences of the disaster, improving the environmental, socio-economic situation and living conditions of the local population.

A significant event was also the holding in 2018 after a ten-year break of the meeting of the International Fund for Saving the Aral Sea in Turkmenistan.

The meeting discussed issues of improving the fund's activities, improving the environmental situation in the region, coordinated water resources management, strengthening cooperation between Central Asian countries in this direction.

Speaking about the need to unite efforts to overcome the negative consequences of the Aral Sea crisis and improve the socio-economic situation in the Aral Sea region, the head of Uzbekistan stressed that IFAS is the only regional organization in this direction, which can become an effective mechanism for interaction between our countries.

Also, great attention was paid to the implementation of practical measures for the development of water cooperation in the region, aimed at improving the environmental situation in the Aral Sea region. It was proposed to form a single list and ensure the joint preparation of innovative projects, taking into account the experience of implementing such projects in ecologically unfavorable regions of the world, as well as the allocation of long-term concessional loans and grants for these purposes.

To this end, in 2018, the Aral Sea International Innovation Center was established under the President of the Republic of Uzbekistan, which is designed to intensify efforts in the field of research, technology transfer and education in conditions of salinity. Scientists have proven that planting such a desert plant as saxaul on the dried bottom will help retain a layer of sand and salt, change the structure of the soil, and restore biodiversity.

Significant financial and human resources were allocated to turn the desert into an oasis. And, despite the difficult 2020, which was entirely aimed at combating coronavirus infection, the large-scale greening work that had begun on the dried-up bottom of the Aral Sea did not stop.

According to the latest data, the area of forest plantations on the dried bottom of the Aral Sea has reached 1.2 million hectares.

At the same time, it is important to note that control over the execution of decrees and resolutions of the President, aimed at the development of the Aral Sea zone, has been strengthened. For these purposes, in 2020, the Committee for the Development of the Aral Sea Region was created in the Senate of the Oliy Majlis. Under his leadership, active work is underway to implement a number of projects aimed at transforming the zone of ecological crisis into a zone of socio-economic development. For example, in the Takhtakupir region of Karakalpakstan, equipment for purification and desalination of water worth US$1.1 million has been installed. In addition, the committee is negotiating with UNESCO on the inclusion of Karakalpak yurts on the UNESCO Representative List of Intangible Cultural Heritage, which will undoubtedly be an important step. in the development of tourism and increasing incomes of the population in the Aral Sea region.

As you know, the head of state has repeatedly called from the high rostrum the world community to actively consolidate international efforts in order to overcome the consequences caused by the drying up of the sea. Back in 2017, President Sh. Mirziyoyev, speaking from the rostrum of the UN General Assembly, clearly demonstrated the map of the Aral Sea and the scale of its tragedy. Therefore, it is especially important that the initiative of the head of Uzbekistan voiced at this session to create a UN Multi-Partner Trust Fund for Human Security for the Aral Sea region found a lively response in the world community. A year later, on November 27, 2018, the Trust Fund was launched at the UN headquarters in New York.

In order to widely inform the public about the goals and objectives of the fund, to raise funds for the implementation of the tasks set before it, various events have been organized with the participation of international donor organizations and financial institutions. One of such significant events was the international high-level conference "Aral Sea - a zone of environmental innovations and technologies", held on October 24-25, 2019 in Nukus under the auspices of the United Nations. It was attended by representatives of many countries, as well as the UN, World Bank, Asian Development Bank, European Investment Bank, European Bank for Reconstruction and Development. At the conference, topical issues were raised related to the need to unite the efforts of the international community aimed at overcoming the consequences of an environmental catastrophe, improving the living conditions of the inhabitants of the Aral Sea region. This forum and other events allowed attracting the necessary investments in a short time and starting the active work of the UN Trust Fund.

Currently, the Fund has accumulated funds in the amount of US$26.1 million, of which in 2019 - US$17 million, 2020 - US$9.1 million. another 123.2 million dollars to create new jobs in the region, improve social and natural conditions in the disaster zone.

The systematic work of the Fund is intended to contribute to the Advisory Committee on Sustainable Development of the Aral Sea Region created under it on December 1, 2020. It provides valuable guidance on how to develop comprehensive solutions to your challenges. Thus, the committee meeting, held on March 30, 2021 under the auspices of the UN and the Ministry of Investment and Foreign Trade of Uzbekistan, was attended by more than 130 representatives of academia, international financial institutions, UN agencies, NGOs, the private sector, government agencies and representatives of civil society.

During the meeting, it was noted that the fund has currently financed projects in the Aral Sea region to ensure access of the population to drinking water, improve the quality of perinatal care, support innovative youth initiatives in agriculture, improve sanitary conditions in secondary schools and improve the health care system.

In particular, it was emphasized that about 35 thousand people in five settlements of the Republic of Karakalpakstan are provided with drinking water, the infrastructure has been significantly improved. In addition, new equipment has been installed in maternity hospitals in Kungrad and Beruniy districts, as well as in the perinatal center of Nukus.

The meeting also approved new projects worth US$12.4 million. The construction of a multidisciplinary hospital in the Muynak region, the introduction of a number of innovative, resource-saving technologies in agriculture, production and utilities were supported.

During the meeting, development partners - the European Union, the European Bank for Reconstruction and Development, the Islamic Development Bank, the United Nations Environment Program, the US Agency for International Development, representatives of a number of countries expressed their readiness to support measures for sustainable development in the Aral Sea region.

The work done testifies to the fact that the idea of creating a UN Multi-Partner Trust Fund turned out to be timely and highly demanded. Thanks to this, it became possible to unite international efforts in overcoming the consequences of one of the largest environmental disasters on the planet, when, before the eyes of one generation, the sea actually turned into a desert with an area of 38 thousand square meters. km.

The Fund has become an important international platform for the implementation of large-scale and long-term projects aimed at providing practical assistance to the world community to the population of the Aral Sea region.

At the same time, the problem under consideration is also in the focus of the leaders of the states of the region. Two consultative meetings (the first in March 2018 in Nur-Sultan, the second in November 2019 in Tashkent), held at the level of the heads of the Central Asian countries, became one of the effective platforms for discussing and solving problems of a regional nature, including environmental ones. The initiator of such meetings was the President of Uzbekistan Shavkat Mirziyoyev.

As a result of the second meeting of the leaders of the countries of the region, a joint statement was adopted, which, along with other topical issues, covered the problems associated with eliminating the negative consequences of the drying up of the Aral Sea.

The document expresses the intention to further develop and strengthen cooperation in the Aral Sea basin. It was also decided to use the capabilities of the International Fund for Saving the Aral Sea and the resources of the Multi-Partner Trust Fund to solve practical problems of attracting new knowledge, innovative technologies to the region, comprehensively introducing the principles of a "green" economy, preventing further desertification, environmental migration and other measures.

An even greater emphasis on this issue was given by the President of Uzbekistan, speaking in September 2020 at the 75th session of the UN General Assembly, where he once again drew the attention of the world community to the continuing destructive impact of the Aral Sea crisis on the entire region. Then the head of state proposed to declare the Aral Sea region a zone of environmental innovations and technologies.

All these initiatives and proposals of the head of state, voiced at reputable world platforms, as well as in the course of events of a high regional level, are being consistently embodied in reality.

Today we are not talking about returning the Aral Sea, but at least overcoming its painful consequences for people. To minimize the disaster caused by this large-scale ecological disaster. Man was the cause of the death of the Aral Sea, but it was he who was able to return life to this land. Man-made forests, which rustled at the bottom of the former sea, give hope for this. This land is literally changing before our eyes, people are getting clean drinking water, modern houses, roads, schools and hospitals are being built. Foreign investors come here, the number of tourists from different parts of the world is growing. All this is evidence that the Aral Sea region is being revived and has great prospects.