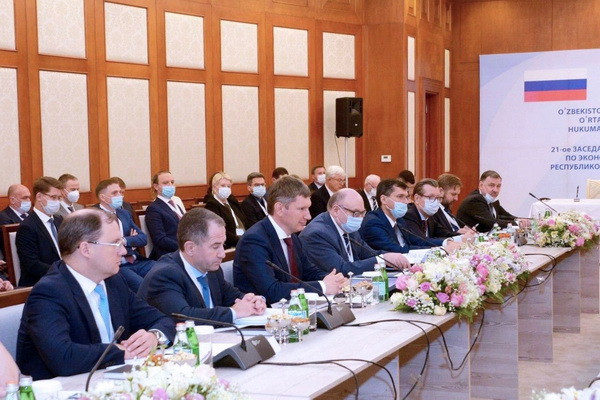 Tashkent, Uzbekistan (UzDaily.com) -- The 21st meeting of the Intergovernmental Commission on economic cooperation between the Russian Federation and the Republic of Uzbekistan was held. The event was chaired by Maxim Reshetnikov, Minister of economic development of the Russian Federation, and Sardor Umurzakov, Deputy Prime Minister, Minister of investment and foreign trade of Uzbekistan.

"The potential for cooperation between our countries is far from to be exhausted, we need to initiate new projects," Maxim Reshetnikov said. In this context, he suggested using more actively the opportunities of the Russian Export Center Group of Companies. "We are actively developing support tools, and we expect that they will be of interest to the Uzbek side," the head of the Ministry of Economic Development added.

Russia and Uzbekistan have also achieved results in developing key areas of cooperation: industry, transport, agriculture, fuel and energy, education and science, and migration, the Minister continued. In particular, GAZ Group reached an agreement to establish a joint venture in Uzbekistan for the production of light commercial vehicles. "Tatneft" plans to create a production of rubber products and equipment for oil refineries on the basis of Birinchi Rezinotekhnika Zavody LLC, as well as a network of gas stations (22 stations are planned). In the field of agriculture, an action plan is being implemented which defines specific steps for further cooperation in the medium term. For example, 22 temporary storage warehouses operating in Russia facilitate accelerated quarantine phytosanitary control of fruit and vegetable supplies from Uzbekistan to the Russian Federation.

It is also planned to partner states in the implementation of investment projects in light industry, mechanical engineering and renewable energy production.

To ensure full traceability of cargo, the Federal Service for Veterinary and Phytosanitary Surveillance is developing a draft Protocol on the transition to integration of information systems in the field of plant quarantine and integration of information systems of Uzbekistan and the Federal Service for Veterinary and Phytosanitary Surveillance system "Vetis" is underway to increase digital interaction in other areas as well. "In the future, this will allow us to remove the unnecessary burden of re-submitting documents, re-examinations, and so on from our enterprises," Maxim Reshetnikov said.

In addition, the tax services of the two countries are successfully implementing an action plan for providing technical assistance to the Republic of Uzbekistan in 2019-2020. 9 stages of work have already been completed and 2 more stages are planned to be completed by the end of 2020. "We are absolutely open and ready to share the technologies that we have invested decades of work and a lot of money in. This is what makes the economy transparent. We are interested in transparency of all operations, because in the end it is the payment of taxes to our budgets which means salaries and social benefits to citizens. It is important that our countries move together in this direction," the head of the Ministry of Economic Development stressed.

"Russia attaches great importance to the development of cooperation in the humanitarian sphere," Maxim Reshetnikov also explained. Cultural ties between Russia and Uzbekistan have always been strong, and now there is an active movement in the field of education and science. Investments in cultural development are the most long-term and long-lasting, and they are no less effective than investments in fixed assets and enterprises."

He noted that the current meeting of the Intergovernmental Commission is preparatory to the meeting of the Joint Commission at the level of the Heads of Governments of Russia and Uzbekistan which is scheduled for mid-December 2020 in Moscow. "We are ready to agree on the majority of documents and decisions based on the results of today's meeting and agreed to clarify the remaining issues by November 1," the Head of the Ministry of Economic Development concluded.

To strengthen interregional cooperation, preparations are underway for the second "Forum of Interregional Cooperation" between Russia and Uzbekistan with the participation of the heads of state, which will be held in Russia.