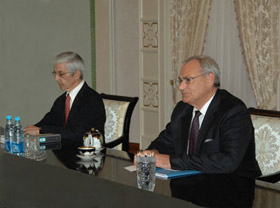 At the meeting at Oqsaroy residence, Uzbek President Islam Karimov emphasized the strategic character of jointly implemented projects in priority sectors of the country’s economy and consistent expansion of cooperation between Uzbekistan and the World Bank.

“Participation of the World Bank representatives in the Asian Development Bank’s annual meeting in Tashkent confirms the high level of relations between Uzbekistan and the World Bank,” President Islam Karimov said.

Philippe Le Houerou expressed his sincere gratitude to the head of the state for the warm reception and noted that holding an international forum of such level in Uzbekistan, which is an example of stable economic growth in the conditions of the global financial crisis, had a particular importance. He also stressed that the present ADB meeting would be another proof of the investment attractiveness and confirmation of the correctness of further modernization of Uzbekistan.

During the talks, the sides exchanged views on the implementation of joint projects and prospects for further development of cooperation between Uzbekistan and the World Bank, UzA reported.