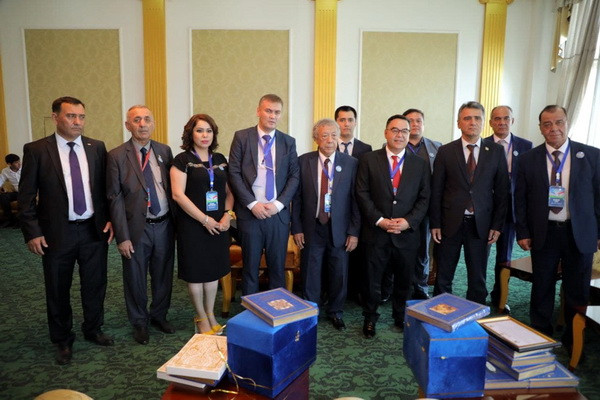 Days of Uzbek cinema are successfully is taking place in Tajikistan

Days of Uzbek cinema are successfully is taking place in Tajikistan

Tashkent, Uzbekistan (UzDaily.com) - The Days of Uzbek Cinema are being held in the Republic of Tajikistan from 19 to 22 May. The delegation headed by the Director General of the Cinematography Agency Firdavs Abdukhalikov included famous cinema figures - People’s Artists of Uzbekistan Khayrulla Sadiev and Tesha Muminov, Honored Artist of Uzbekistan Tokhir Saidov, Honored Worker of Culture of Uzbekistan Jakhongir Akhmedov and others.

The members of the Uzbek delegation were met by Tajik filmmakers headed by the director of the Tajikfilm state institution Mahmasaid Shohiyon. On the first day of the visit, members of the delegation visited the Academy of Mass Media of Tajikistan and took part in a press conference. The General Director of the Agency of Cinematography of the Republic of Uzbekistan F. Abdukhalikov and the head of the Academy of Mass Media of Tajikistan Sadi Mahdi Ismatzoda exchanged views on cooperation in the field of culture and on the development of the national media space and cinematography.

In particular, F. Abdukhalikov spoke about the changes taking place in New Uzbekistan in the spheres of journalism and cinematography, the activities of non-state TV channels, innovations in Uzbek cinema and the expected changes in these areas. The need for further development of cooperation in these areas and the prospects for raising the qualifications of representatives of cinema and the media of both countries were noted.

After that, filmmakers from Uzbekistan visited the National Library. Abu Abdullah Rudaki. The library contains over three and a half million copies of books, newspapers and magazines in different languages. The head of the library, Jumakhon Faizalizoda, told the guests about the history of the library and the rare manuscripts stored here. Representatives of the Uzbek delegation presented to the library a series of books-albums of the series "Cultural heritage of Uzbekistan in the collections of the world." The section of rare sources of this library contains manuscripts of such great scientists as Firdavsi, Nizami Ganjavi, Mirzo Bedil, Abdurahman Jami. Among them, the guests were especially interested in the manuscript of the work "Hamsa" by Alisher Navoi, copied in 1801 in the Bukhara Emirate.

On the same day, guests from Uzbekistan visited the park named after Alisher Navoi in Dushanbe. The park was opened in 2018 and was attended by the heads of two states Shavkat Mirziyoyev and Emomali Rahmon. There are statues of Alisher Navoi and Abdurahmon Jami in the garden. The guests laid flowers at the monument of great writers.

In the evening, the opening ceremony of the Days of Uzbek Cinema in Tajikistan took place at the Vatan cinema in Dushanbe. The heads of the film industries of the two countries spoke about the role of free events in the cultural life of the peoples, and also shared information about the planned projects for the development of Uzbek and Tajik cinema.

“A common destiny can be traced in the history of cinematography of our countries,” noted F. Abdukhalikov, head of the Uzbekistan Cinematography Agency.

- In particular, the famous film director Kamil Yarmatov, who made a great contribution to the development of Uzbek cinema, was born and raised in Kanibadam, and such famous representatives of Tajik cinema as Boris Kimyogarov, Anvar Shukurov and Samariddin Sadiev were born in Samarkand. Many representatives of the Uzbek cinema can be seen in Tajik films. A number of Tajik actors and actresses have also created unique characters in Uzbek paintings. We must continue these historical traditions.

In turn, the head of the Tajikfilm institution M. Shohiyon noted that he shot films in a number of cities of Uzbekistan, and that in the future it is necessary to organize the creation of new films together with Uzbek filmmakers.

Within the framework of the event, the audience was presented with the feature film "Ilkhak" directed by Jakhongir Akhmedov. The picture was greeted with delight by the audience.

- I am from Devashtich district of Sughd region, - says a student of the Tajik State Institute of Culture and Arts Durdona Rasulova. - My mother and I have seen this film before. It is safe to say that the film tells about the fate of not only the Uzbek, but also the Tajik peoples. Because in our country there were many brave personalities, such as the heroes of this film. Therefore, everyone who was at the premiere today watched this film with great enthusiasm.

The days of Uzbek cinema in the Republic of Tajikistan continue. Today, on 20 May, Uzbek filmmakers will visit the city of Gissar.