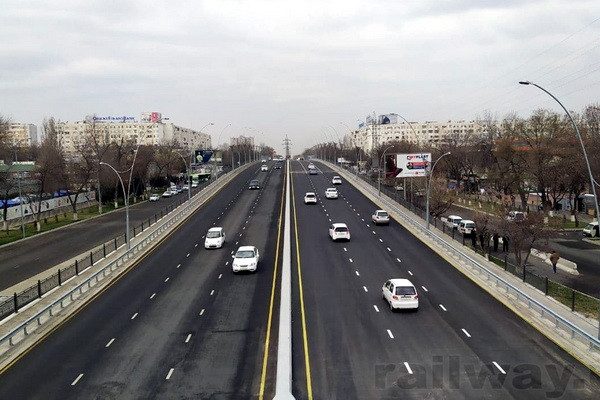 Another overhauled overpass, located at the intersection with Amir Timur Street, was put into operation

Another overhauled overpass, located at the intersection with Amir Timur Street, was put into operation

Tashkent, Uzbekistan (UzDaily.com) - Today, on 4 March, another overhauled overpass located on Ahmad Donish Street at the intersection with Amir Timur Street was commissioned in the capital.

This project was implemented within the framework of the execution of the resolution of the President of the Republic of Uzbekistan No. PP-3632 dated March 29, 2018. In accordance with the design and estimate documentation of this overpass, financing from the local budget in the amount of 10.9 billion soums was provided.

The total length of the overpass is 495.55 meters, width - 31.34 meters. An artificial structure connecting the two districts of the city was built in 1999 and since the commissioning of the facility, which is over 20 years, no repair work on the overpass has been carried out. Undoubtedly, during this time, the roadway, including asphalt concrete pavements, reinforced concrete structures, decorative slabs, metal fences, as well as expansion joints in the form of a comb type, fell into disrepair and created quite a few problems for vehicle drivers.

The overhaul of this traffic intersection was started on 6 January 2021 by specialists of the Kuprikkurilish Trust Unitary Enterprise under the Uzbekiston Temir Yollari JSC. All dismantling and installation work was carried out in accordance with the relevant rules and established standards. Taking into account the high throughput of this section, the repair work was carried out in stages, without interrupting car traffic.

According to the regulations, during the overhaul of this overpass, dismantling, installation, and insulation works were carried out. Reinforced concrete structures of fender wheels and decorative slabs were installed, and the asphalt-concrete surface of the road was also renewed.

The decared poles of street lighting, metal railings and barriers, corresponding to the general concept of urban architecture, also acquired an updated look.