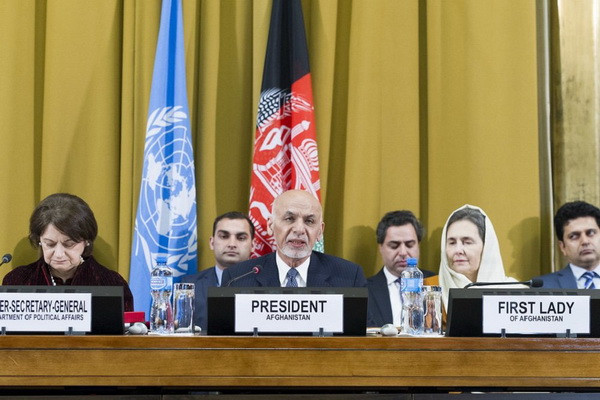 Tashkent, Uzbekistan (UzDaily.com) -- From 23 to 24 November 2020, the Geneva International Conference on Afghanistan was held online under the chairmanship of the heads of government of Afghanistan and Finland, as well as the UN.

The main goal of the forum is to determine the key landmarks for the country’s development and measures of support from the world community for 2021-2024. The event was attended by representatives of about 70 countries and 32 international organizations.

This conference is the latest in the allocation of funds to Afghanistan within the framework of the “Decade of Afghanistan Transformation until 2024” program, agreed in Bonn in 2011, adopted to help Afghanistan achieve sustainable development and stability. At the last conference in Brussels in 2016, Afghanistan received total commitments of US$15.2 billion for 2017-2020, which is equivalent to US$3.8 billion per year.

I. Speaking at the conference, President of Afghanistan Ashraf Ghani noted the importance of reaching a strong regional consensus for establishing long-term and sustainable peace in Afghanistan.

As a key condition for reaching a consensus, the leader of Afghanistan indicated the involvement of Afghanistan in regional trade and economic ties by 1) supporting efforts to accelerate regional projects; 2) ensuring the alignment of interests through the adoption of global standards or the creation of regional standards in the field of trade, transit and transport; 3) examining gaps in critical infrastructure in Afghanistan; 4) helping Kabul become a center for green energy and industry; 5) expanding cooperation with Afghanistan as part of its digital transformation program. Ashraf Ghani emphasized that “he expects cooperation, not charity”.

Introducing the National Peace and Development Program, Ashraf Ghani said that in the coming period the government’s efforts will focus on inclusive growth and poverty reduction. At the same time, the priority areas are the development of agriculture, trade, the empowerment of women, the modernization of the health care system, the strengthening of basic education and effective management.

Afghanistani Foreign Minister H. Atmar also made a report. Citing the rise in violence in the country as a major factor in destabilizing the socio-economic situation and holding back the peace process, he called on the TD to reduce the level of violence.

The first lady of Afghanistan, Ghani, also made an appeal to Taliban to reduce violence in the country, who in her speech emphasized the need to protect the rights of women during negotiations with the Taliban. The UN High Commissioner for Human Rights M.Bachelet also spoke in support of the women of Afghanistan, stating that "women’s rights cannot be infringed upon, and Afghan women should take an active part in the peace process."

Afghanistani Minister of State for Peace M. Naderi stressed that in order to achieve long-term peace in the country, it is necessary to ensure the inclusiveness of the peace process and the preservation of the achievements of Afghanistan over the past 19 years, for which the support of the international community is important.

UN Secretary General A. Guterres, assuring the Afghan government of international support, expressed the hope that donor funds will lead to real progress and concrete improvements for the people of Afghanistan.

Acting First Deputy Head of the United States Agency for International Development (USAID) John Barsa also announced his continued support for the Afghan government, pointing out that the reduction in the number of the American military contingent in Afghanistan will not lead to a reduction in support for Kabul, and the United States will continue to seek "self-sufficiency" for Afghanistan.

The European Union has pledged to provide US$1.43 billion in aid to Afghanistan over the next four years. The UK has said it pledges US$227 million in annual civilian and food aid to Kabul. The Netherlands is also providing over US$200 million to boost Afghanistan’s economy. Indian Foreign Minister S. Jaishankar announced New Delhi’s readiness to allocate US$80 million for the implementation of 100 "highly effective projects" in Afghanistan.

As a result of the conference, the "Partnership Framework for Afghanistan" was adopted, the purpose of which is to assist Afghanistan in moving towards self-sufficiency and the successful implementation of the government’s development agenda and achieving the tasks identified in the program "Decade of Afghanistan Transformation until 2024".

II. According to the world’s leading publications, the donor conference for Afghanistan took place at a historic and critical time.

On the one hand, Kabul’s international partners must cope with the consequences of the global pandemic in their countries, on the other hand, Afghanistan government is also in crisis: negotiations with the Taliban are practically not progressing, and the violence continues to grow. Meanwhile, Kabul is often criticized for widespread corruption.

According to the New York Times, in the last 10 years alone, about US$19 billion in aid has not been used as intended. Reuters emphasizes that on the eve of the conference, a number of European countries made claims to President Ashraf Ghani regarding the scale of corruption in the country. Western diplomats linked the preservation of international financial aid to Afghanistan with the convincing achievements of the Ghani administration in the fight against corruption.

According to the Guardian, Ashraf Ghani immediately reacted by announcing the appointment of five special commissioners to combat corruption and the transfer of this sphere under the control of the country’s first vice-president A. Saleh, who recently actually coordinates the work of all law enforcement and security agencies of Afghanistan. It is noted that by this step Ashraf Ghani intends to prove the seriousness of his intentions in the fight against corruption. Nevertheless, according to Tagesschau, in general, a reduction in aid to Kabul is expected by 15-20% against 15 billion allocated in 2016. Moreover, the government of Afghanistan is imposed on tough political conditions in order to properly allocate funds.

Arab News writes that Taliban leaders are also trying to access international financial assistance from Afghanistan. On the eve of the conference, the Taliban announced the need to distribute external financial support in the country with the participation of their representatives and structures. According to experts, Taliban considers access to international assistance not only as another stage in the political legitimation of the terrorist movement, but also as an additional source of financing for the militants.

Overall, experts believe that continued support is critical today as the COVID-19 crisis has exacerbated Afghanistan’s problems. However, according to the World Bank’s analysis, the achievement of economic growth and self-sufficiency in Afghanistan can be achieved through a gradual and systematic reduction in economic assistance. Otherwise, Afghanistan will continue to be dependent on international aid.