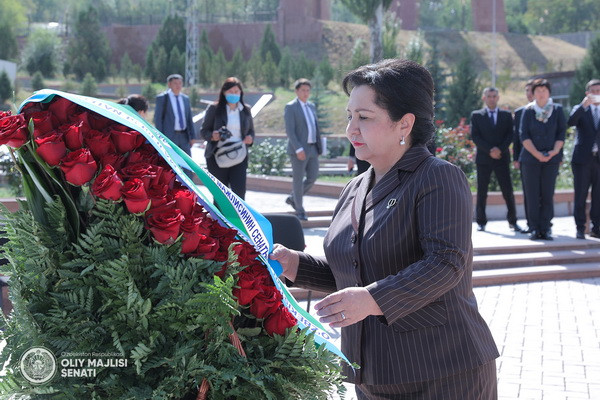 Tashkent, Uzbekistan (UzDaily.com) -- During an official visit to the Kyrgyz Republic, members of the delegation led by the Chairman of the Senate of the Oliy Majlis of the Republic of Uzbekistan visited the Ata-Beyit memorial complex and laid a wreath at the monument to the People's Writer of Kyrgyzstan Chingiz Aitmatov.

Here, in honor of the great writer and public figure Chingiz Aitmatov, suras from the Koran were read. It was emphasized that he was a dear and respected person not only for the Kyrgyz people, but also for all Turkic countries, including the Uzbek people. His immortal artistic legacy has played an important role in strengthening the friendship between the two peoples.

It should be noted that in 2018, according to the relevant decree of the President of the Republic of Uzbekistan, our country widely celebrated the 90th anniversary of Chingiz Aitmatov, who made a huge contribution to the development of friendship, literary and cultural ties between our peoples.

The President of the Senate also visited the house-museum of Chingiz Aitmatov and left her wishes in the Book of Honored Guests.