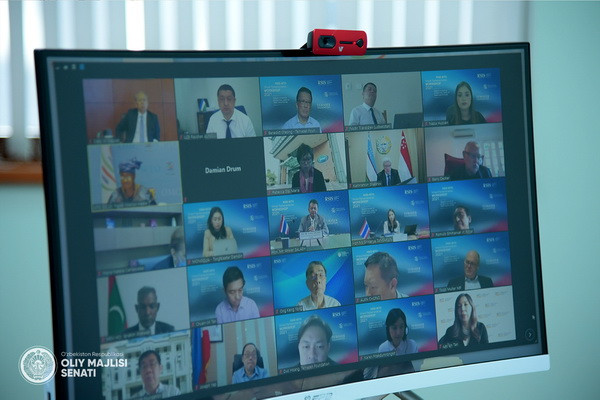 Tashkent, Uzbekistan (UzDaily.com) - On 17 May 2021, a three-day virtual parliamentary seminar of the World Trade Organization (WTO), held jointly with the School of International Studies named after A. S. Rajaratnam at Nanyang Technological University (Singapore), started.

The event was attended by the Director General of the WTO, Ms. Ngozi Okonjo-Iweala, the Secretary General of the Inter-Parliamentary Union (IPU), Mr. Martin Chungong, parliamentarians from 19 countries of the world, heads and representatives of diplomatic missions in Singapore, as well as scientists, experts and representatives of private sector. From the Senate of the Oliy Majlis of the Republic of Uzbekistan, the chairman of the Committee on International Relations, Foreign Economic Relations, Foreign Investments and Tourism Ravshanbek Alimov participates in the event.

During the seminar, the issues of the current state of international trade and the process of its recovery after the pandemic are discussed. The participants noted the high urgency of combining the efforts of the international community to enhance trade relations between countries, support international trade, as one of the most effective mechanisms for increasing employment and overcoming poverty.

The speakers also emphasized the importance of the participation of the parliaments of the partner countries, the need to intensify cooperation and exchange of information within the framework of the Inter-Parliamentary Union and other multilateral structures. Particular emphasis was placed on developing a strategy and work plan for trade facilitation in the post-pandemic recovery.

The format of the seminar allowed the representatives to ask questions of interest and take an active part in the discussion of the agenda. The event is aimed at raising the level of legal awareness of parliamentarians from around the world, as well as exchange of best practices in this area.