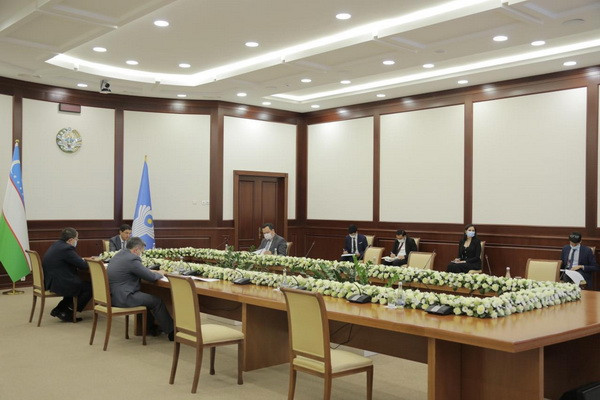 Tashkent, Uzbekistan (UzDaily.com) -- On 15 September 2020, the 87th meeting of the Economic Council of the Commonwealth of Independent States was held in the format of video conferencing. The agenda of the event, chaired by Deputy Prime Minister, Minister of Economic Development and Poverty Reduction Jamshid Kuchkarov, included issues of economic cooperation between the CIS member states in the trade, economic, agro-industrial, scientific, technical, cultural and humanitarian spheres.

The event was attended by First Deputy Prime Ministers of Azerbaijan and Tajikistan, Deputy Prime Ministers of Armenia, Belarus, Minister of Economy and Infrastructure of Moldova, First Deputy Ministry of Economic Development of Russia, Deputy Minister of Finance and Economy of Turkmenistan, plenipotentiaries of Kazakhstan and Kyrgyzstan in the Commission on Economic Affairs of the CIS , as well as the chairman of the CIS IC Sergey Lebedev.

Following the meeting, 18 decisions were made on strengthening cooperation in the economy, energy, agriculture and agricultural machinery, as well as on financial support for the activities of the CIS bodies and a number of other events, including "On the draft Action Plan for the implementation of the first stage (2021 –2025) Strategy of economic development of the Commonwealth of Independent States for the period up to 2030 "," On the draft Interstate program of innovative cooperation of the CIS member states for the period up to 2030 ".

The meeting participants also discussed organizational issues, in particular, the issue of holding the the 88th meeting of the CIS Economic Council on 4 December 2020 in Moscow (Russian Federation).

Following the meeting, the participants decided to continue economic cooperation, including within the framework of the Economic Council of the Commonwealth of Independent States.

The speakers expressed their gratitude to the Uzbek side for the high level of organization of the 87th meeting of the CIS Economic Council.