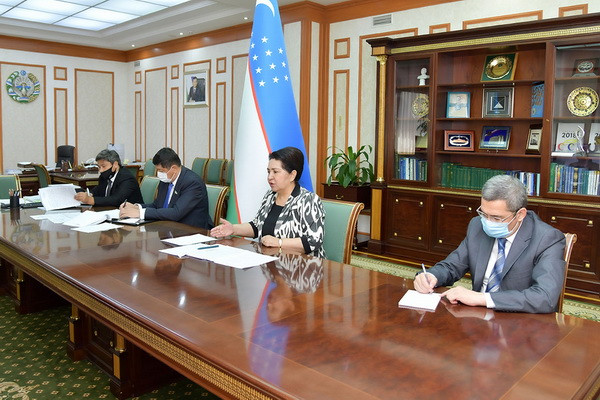 Tashkent, Uzbekistan (UzDaily.com) -- On 21 August 2020, an online meeting was held between the Chairman of the Senate of the Oliy Majlis of the Republic of Uzbekistan Tanzila Narbaeva with the Ambassador Extraordinary and Plenipotentiary of the United States of America Daniel Rosenblum.

During the conversation, the sides exchanged views on expanding cooperation between the two countries, in particular in the field of combating human trafficking and forced labor.

It was noted that thanks to the efforts of the presidents of the two countries, relations between Uzbekistan and the United States were raised to a qualitatively new level.

The Ambassador noted with satisfaction the enormous and effective work carried out by Uzbekistan to combat forced labor and human trafficking. Emphasizing the country’s progress in the fight against forced labor, the American side noted that Uzbekistan’s significant efforts to solve this problem set new standards for other republics in the region, and this experience is an example to follow. Daniel Rosenblum welcomed the operational measures taken by the Uzbek side to implement the recommendations of the US State Department to further improve the situation in this area.

He highly appreciated the activities of the National Commission on Combating Human Trafficking and Forced Labor under the leadership of the Chairman of the Senate of the Oliy Majlis T. Narbaeva.

The US Ambassador focused on the fact that the adopted new Law of the Republic of Uzbekistan “On Counteracting Trafficking in Human Beings” fully complies with international standards, and in particular provides for a corner punishment for forced labor.

The issues of improving the work of law enforcement agencies in connection with the adoption of this Law, involvement in this process along with the relevant structures and institutions of civil society were discussed.

The importance of expanding the framework of partnership in this direction was noted. In this context, the US Ambassador expressed his country’s readiness to share experience with the law enforcement agencies of Uzbekistan, as well as in matters of prosecution of persons involved in this type of crime.

The participants in the dialogue noted the growth of legal awareness of the citizens of Uzbekistan in these issues, which was also the result of large-scale work in the corresponding direction. It was emphasized that parliamentary control has been strengthened, and the responsibility of the heads of executive authorities has been increased.

In addition, the parties considered the possibilities of cooperation in the implementation of projects on gender equality, exchange of visits between parliaments, organization of forums and seminars aimed at developing cooperation between the legislative bodies of the two countries.