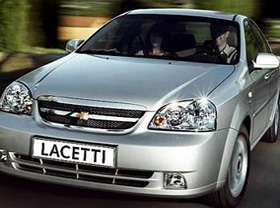 GM Uzbekistan has signed a US$41.5 million contract with South Korea’s General Motors Daewoo and Technology (GM DAT), a subsidiary of US automaker General Motors (GM), on the supply of equipment to set up the production.

The production capacity of the plant is 30,000 Chevrolet Lacetti cars annually, including 5,000 cars earmarked for export. The project is financed due to interest-free loan of Uzavtosanoat for US$47.7 million, issued to GM Uzbekistan for six years.

UzDaewooAuto started assembly production of Daewoo Lacetti cars in August 2003. Since that time, the plant has produced 6,345 units, most of which were sold on the domestic market.

UzDaewooAuto was set up on a parity basis by state-owned Uzbek automaker Uzavtoprom and South Korean automaker Daewoo Motor. The car plant worth US$650 million has been commissioned in 1996 in Asaka, Andijan region. The capacity of the plant is 200,000 cars per year. In May 2005, Uzavtoprom bought Daewoo’s stake for US$110 million.

General Motors and UzAvtoSanoat state-owned company signed agreement on creation of new joint venture - GM Uzbekistan - on the base of UzDaewooAuto. GM Uzbekistan JV has been set up to manufacture and sell Chevrolet automobiles in Uzbekistan.

GM and Uzavtoprom completed process of creation of GM Uzbekistan on the base of UzDaewoo Auto in the end of March 2008. The charter capital of new venture is US$266.7 million.