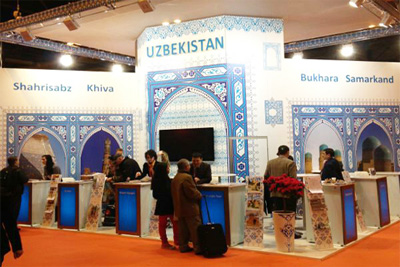 Uzbekistan participates at FITUR 2014 in Spain

Uzbekistan participates at FITUR 2014 in Spain

Tashkent, Uzbekistan (UzDaily.com) -- A delegation of Uzbekistan participated in the international tourism exhibition in Spain – FITUR 2014, the press service of Uzbektourism said.

The Uzbek companies presented their opportunities at the event and hold presentation of tourism product of Uzbekistan to attract more tourists to the country.

The stand was developed in national style, characterizing tourism potential of Uzbekistan. It was developed at support of Germany’s GIZ.

During the exhibition, the chairperson of Uzbektourism Farrukh Rizaev met with the UNWTO General Secretary Taleb Rifai at the stand of Uzbekistan.

The sides considered perspectives of developing tourism industry and issues on organization of the 99th session of the UNWTO Executive Council in Samarkand in October 2014.