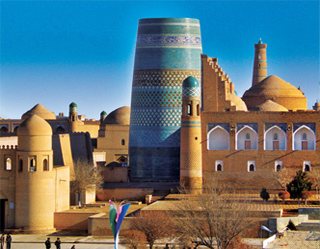 Tashkent, Uzbekistan (UzDaily.com) -- One of the largest tourism events in Central and Eastern Europe Ferien Messe Wien – 2014 was held in Vienna, Austria. It was attended by over 700 companies, hotels and airlines from 70 countries.

The stand of Uzbekistan was organized by the Embassy of Uzbekistan in Austria and presented with tourism companies, which offer various tours to Uzbekistan. Presentation materials and brochures on historic and cultural heritage of Uzbekistan were presented at the fair, Jahon news agency reported.

At the presentation, it was noted that favourable economic conditions, stability and large number of historic-architecture monuments help to develop tourism industry of Uzbekistan.

During the event, large number of applications to visit Uzbekistan in 2014 was received.

Sales manager of Tai Pan (Austria) Sabine Petrick said that there are growing demand to tours in Uzbekistan, its history and culture. Tourists in Uzbekistan receive quality hotel, transport and other tourism services, she added.

She said that Tai Pan plans to organize visit of over 20 tourism groups from Austria to Uzbekistan in 2014 due to high demand.