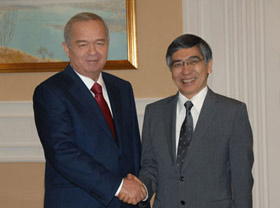 Tashkent, Uzbekistan (UzDaily.com) -- President of Uzbekistan Islam Karimov received President of the Asian Development Bank Haruhiko Kuroda on 30 April, on the eve of the 43rd Annual meeting of the ADB Board of Governors, at Oqsaroy residence in Tashkent.

Welcoming the guest, the head of the state noted that the ADB was considered one of the most authoritative and influential international financial institutions, with which Uzbekistan has been connected by ties of long-standing and reliable partnership. The consistently implemented strategy of ADB cooperation with Uzbekistan is the proof of that.

“Let me thank you for the choice of Tashkent as the venue for the Asian Development Bank meeting. Holding an international forum of such level in Tashkent is a great honor for our country. At the same time, this is an event of historic significance,” Islam Karimov said.

“At the latest meetings of governors of the Asian Development Bank, four large investment project worth over US$1.14 billion were approved. These projects cover such important areas as improving transport and communication infrastructure, drinking water system, development of communal services, construction of combined-cycle plants at Talimarjan thermal power station, and support of small businesses and private entrepreneurship through the country’s commercial banks,” President of Uzbekistan said.

Haruhiko Kuroda emphasized that Uzbekistan was one of the few countries in the world where stable economic and social development rates were ensured. In his opinion, the basis for success of the “Uzbek model” is also the fact that the leadership of Uzbekistan did not rely solely on external borrowing, but has taken active steps to diversify the economy and ensure rational management of rich mineral, industrial and agricultural resources and, most importantly, the powerful and highly intellectual human potential in modern conditions.

The ADB President expressed his sincere gratitude to the President of Uzbekistan for the warm reception, assuring of the ADB’s commitment to further expand and develop partnership relations with Uzbekistan in various sectors of economy and social development, UzA reported.

Uzbekistan, jointly with the Asian Development Bank, is implementing large projects in priority sectors of economy, which focus on development of strategically important and vital industries. Effective implementation of these projects, developed in conjunction with ADB specialists, has become possible thanks to the country’s legal basis of reforming and liberalizing the economy, as well as favorable investment climate.

The 43rd Annual Meeting of the ADB, which starts its work in Tashkent these days, is the first forum of such level in the region of Central Asia and is a recognition of the effectiveness of the “Uzbek model” of development by the international community. On 2-4 May, the meeting of finance ministers of ASEAN+3 will also be held in Tashkent, where the ADB’s Strategy 2020 will be discussed, along with issues of reforming the global financial architecture, regional cooperation and post-crisis development in Asia, protection of the environment and climate change.