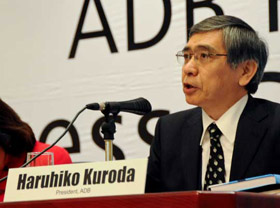 Around 3,000 delegates - including government leaders, central bank governors and finance ministers as well as representatives from academia, the media and civil society groups - are expected to attend the ADB’s 43rd Annual Meeting from 1-4 May.

The 2010 gathering marks the first time the ADB has held its Annual Meeting in Central Asia. Uzbekistan joined ADB in 1995 and since that time has received 30 ADB loans totaling $1.29 billion and technical assistance of $40.75 million.

In Tashkent, President Kuroda will visit the Annual Meeting venue, Uzexpocentre Central Exhibition Hall, and meet with senior Uzbekistan government officials. He will also be visiting ADB-supported projects in Samarkand and Bukhara.

At the Annual Meeting, ADB officials, government leaders and private sector experts will participate in a series of seminars dedicated to key issues such as ADB’s role in a new, post-2012 financial architecture designed to combat climate change; reform of the global monetary system; and promoting inclusive growth through social protection. The theme of this year’s keynote Governors’ Seminar will be "Asian Integration and Global Growth."