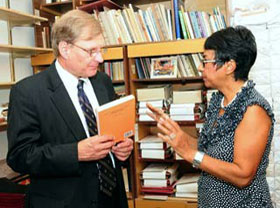 Tashkent, Uzbekistan (UzDaily.com) -- Recent upgrades at the Tamara Khanum Museum in Tashkent enable visitors to get a better, more personal look into the life of the famous dancer who brought Uzbek music and culture to the world.

In 2008, the museum received a US$34,000 grant from the US Ambassadors’ Fund for Cultural Preservation to revitalize and expand exhibits. The museum has used the funds to restore 75 costumes the dancer wore as she performed around the world, create a new exhibit of hundreds of historical photographs, record an audio guide for visitors to learn about the life of Tamara Khanum, and to improve the display of the museum’s exhibits.

The results are impressive. A brightly lit sign now adorns the intricate woodwork outside the museum. The main exhibition area sparkles with dozens of the restored costumes that Tamara Khanum collected as she performed in countries around the world.

A new exhibition area displays hundreds of photographs with captions in Uzbek, Russian, and English. The photos include pictures of the young dancer and the musicians with whom she performed, black-and-white scenes of life in Uzbekistan in a bygone era, and posters advertising her international performances. Together they tell the story of the dancer’s life, as well as that of a changing cultural landscape as Uzbekistan evolved throughout the 20th Century.

Tamara Khanum was born in 1906 in the Ferghana Valley to a family of Armenian descent. She began dancing at a young age, moving to Tashkent and later to Moscow to study ballet and other dance forms. As her professional career advanced, she became a cultural icon of a modern woman free to dance in public - without a veil - something that was previously not done in Uzbekistan, according to Gulsum Khamraeva, the director of the Tamara Khanum Museum.

“She was one of the founders of modern Uzbek dance. She was the first to step on the stage with an open face,” according to the audio history at the museum.

Tamara Khanum performed in countries around the world, bringing the beauty of Uzbek music and dance to audiences who had never before been exposed to it. She was awarded the Soviet Union’s highest honors for artistic expression.

The museum also has published Tamara Khanum’s autobiography and built a website with photos and information about the museum and her life.

On 4 November, US Ambassador Richard Norland and his wife, Mary Hartnett, toured the museum. Khamraeva explained how Tamara Khanum collected traditional costumes from so many nations and regions by offering to perform a traditional dance at each stop on her international tours.

“Well, of course she needed something to wear for the performance,” Khamraeva said. The result is the collection of dozens of costumes from countries and regions as far-flung as Albania and Indonesia, Korea and Karakalpakstan.

Since 2001, the Ambassador’s Fund for Cultural Preservation (AFCP) has contributed about US$125,000 to support seven projects that help preserve Uzbekistan’s rich history and culture. These include: