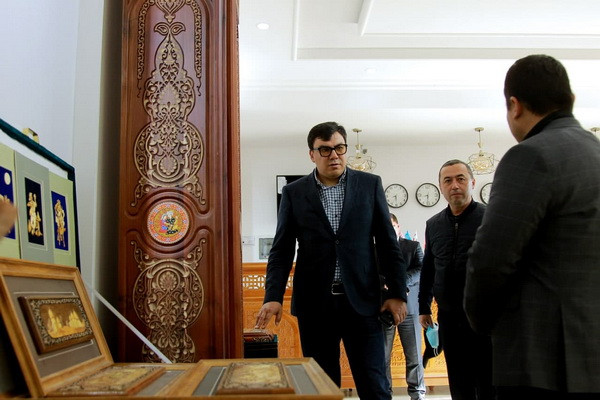 The potential of tourist sites in Bukhara region has been studied

The potential of tourist sites in Bukhara region has been studied

In particular, he visited the “Sitorai-Mohi-Hossa” summer palace, “Shahriston” square, “Abdulaziz Khan” and “Mirzo Ulugbek” madrassas, the “Gaukushan”, “Chor-Minor”, “Sarrofon” and “Kunjak” complexes, as well as the crafts center and a number of hotels. During the study, the existing problems and shortcomings in the ancient objects of the region, as well as measures to eliminate them, were discussed.

At the same time, the necessary instructions were given for the improvement, installation of modern signs in 3 languages, informing about all the exhibits in museums, providing access to them via a QR code, as well as for the development and implementation of the “Avokado consalting” LLC public catering project called “Amir’s Tent” with a light design in the national oriental style on the territory of the parking lot measuring 20×30 meters at the back of the arch.

Within the framework of the visit of the deputy Prime minister, a meeting with entrepreneurs engaged in tourism was also organized.

Aziz Abdukhakimov, during a trip to the ancient part of the city, instructed the responsible persons to develop an action plan for updating and installing modern information and navigation signs and organizing a “Gastronomic Street” on Bahouddin Naqshband street, where, on his behalf, the “Bukhara food caravan” festival will be held on a certain day of the week.

Also, the responsible persons are entrusted with the relevant instructions and tasks for the wide holding of such national holidays from Muynak to Khanabad on the scale of the republic, for the development of a concept and an action plan for the organization of various additional services for tourist centers in order to diversify tourist services in the region, paying special attention to the issues of marketing and monetization of tourism.