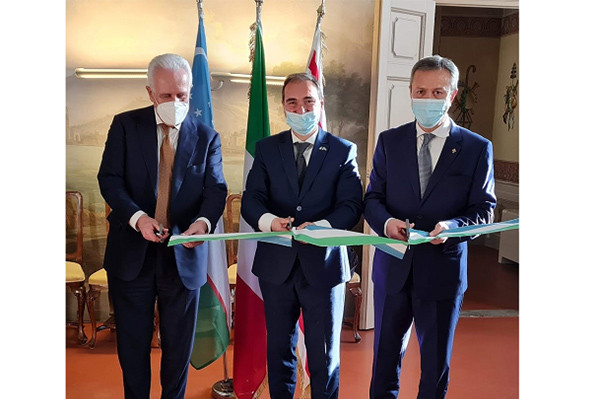 Tashkent, Uzbekistan (UzDaily.com) -- On 26 February, Ambassador of Uzbekistan to Italy Otabek Akbarov presented the president of the Il Santuccio Wine Association Leonardo Comucci with a consular patent confirming his appointment as honorary consul of our country in the Italian regions of Tuscany and Umbria with an office in the city of Florence, Dunyo reports.

The official opening ceremony of the honorary consulate of Uzbekistan with the cutting of a symbolic ribbon took place in the building of the government of Tuscany region with the participation of President (Governor) Eugenio Giani, his advisers and representatives of the local media.

Welcoming the audience, the Ambassador noted that the decision to open an honorary consulate in Florence is another indicator of the desire of the leadership of Uzbekistan to intensify all-round cooperation with Italy with the involvement of regions and coverage of a wide range of trade, economic, cultural and humanitarian issues.

It was emphasized that the city of Florence, in which the fundamental Partnership and Cooperation Agreement between Uzbekistan and the European Union was signed in 1996, is of particular importance for our country. The regions of Tuscany and Umbria, known in the world for their historical and cultural heritage, have significant potential for the development of mutually beneficial relations with Uzbekistan in a number of areas of economy, education and science.

For his part, Governor Eugenio Giani welcomed the opening of the honorary consulate of Uzbekistan and expressed the readiness of the regional government of Tuscany to provide all possible assistance in the formation and development of its activities. As emphasized, the honorary consulate will contribute to the active implementation of the 2012 Friendship and Cooperation Agreement between the administration of the province of Florence and the khokimiyat of Samarkand.

The governor said that his visit to Uzbekistan in July is being prepared at the head of a delegation from Tuscany with the participation of representatives of business, educational and cultural circles of the region.

Honorary Consul Leonardo Comucci in his speech thanked the government of Uzbekistan for the honor given to him to represent the republic in two regions of Italy. He assured that he would facilitate the establishment and development of partnerships between institutions of the two countries involved in foreign economic activity, as well as companies, enterprises and banks of the two countries, in order to more actively involve the business community, investments and technologies of Italy in the development of priority sectors of the economy of Uzbekistan, as well as promoting Uzbek exports in the regions of Tuscany and Umbria. At the same time, as president of the Il Santuccio Wine Association, he will pay special attention to the development of cooperation in this area.

Leonardo Comucci is the second honorary consul of Uzbekistan in Italy. In the Campania and Molise regions, with an office in Caserta, Vittoria Giorgi is the Honorary Consul of our country.