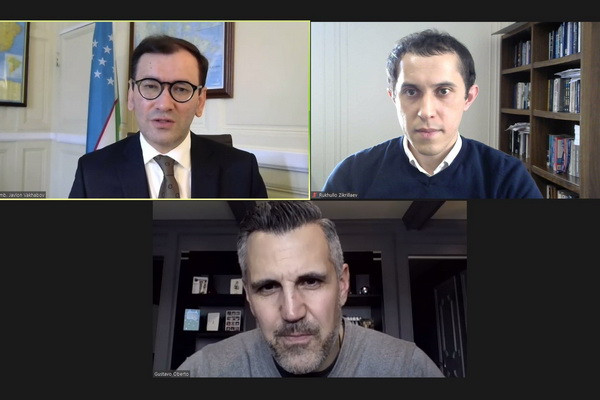 Founded in 1955, Lindsay is a major manufacturer of pivot systems, construction equipment, and road and rail infrastructure equipment. Based in Nebraska. It has 9 offices in the world, including production facilities in the USA, France, Turkey, South Africa, China, Brazil. The market capitalization is over US$1 billion.

It was noted at the meeting that the Strategy for the Development of Agriculture adopted in Uzbekistan, as well as the Concept for the Development of Water Resources for 2020-2030, creates a good basis for interaction. The American side welcomed the measures taken by the Government of Uzbekistan to ensure food security, create a favorable agribusiness climate, improve the reclamation state of irrigated lands, introduce mechanisms and digital technologies in the water economy, as well as increase the efficiency of land and water resources use.

The President of Lindsay noted that complex technological solutions for mechanized irrigation of the Zimmatic product line fully meet the country’s interests in introducing mechanisms for the rational use of water resources and will be very useful in the transition to a cluster form of cotton, textile and food production.

According to Gustav Oberto, Zimmatic’s product lines have pivot and frontal irrigation systems tailored to the terrain, climate and crop types. Each technology is equipped with "FieldNET" wireless monitoring controls. In addition, the main advantage of this product is the new innovative Smart Pivot platform, developed in collaboration with Microsoft and Taranis specialists. "Smart Pivot" makes it possible to monitor crop stability, soil moisture, metrological forecasts, which increases the reduction in water supply.

As a result of the negotiations, an agreement was reached to study the implementation of a pilot project to create a "smart farming" using advanced technology "Zimmatic" on the basis of the Center for Knowledge and Innovation in Agriculture (AKIS), created in the regions of the country. This project will also play the role of a training and demonstration complex for Uzbek farmers and cluster specialists to study the features of water-saving systems and teach them how to manage them.

To this end, it is planned to hold meetings and negotiations with the leadership of the Ministry of Agriculture, as well as textile and industrial clusters of Uzbekistan to discuss the implementation of joint investment and commercial projects.