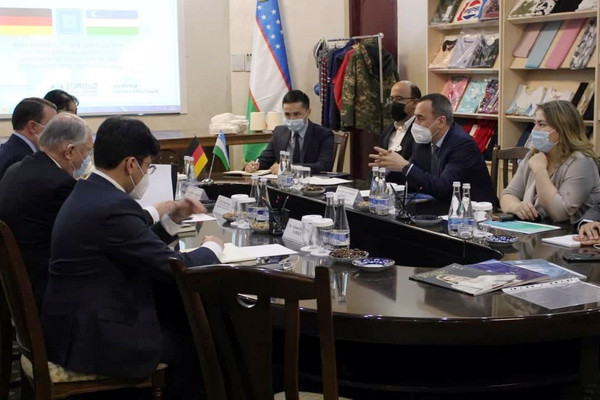 Tashkent, Uzbekistan (UzDaily.com) -- A number of European large retailers and clothing brands are considering the potential for establishing cooperation with textile companies in Uzbekistan.

According to Klaus Mangold, in the face of the Pandemic, many German companies are reevaluating the textile supply chains on which the development of German textile machinery depends. At the same time, Germany is revising its textile policy. Data show that textile exports from Uzbekistan have declined. However, German retailers are ready for dialogue and in the second half of 2021, a large delegation from Germany is scheduled to visit, which is expected to include famous clothing brands.

In turn, Ilkhom Khaidarov spoke about the achievements in the textile industry, in particular, about reforms in the cotton sector, the successful implementation of projects in cotton and textile clusters, subsidies for product certification by the Government.

Special attention was paid to the implementation of the project jointly with the German Community for International Cooperation GIZ and the international consulting company Gherzi on the Export promotion and fashion incubator project, deepening cooperation with Better Cotton Initiatives, and approving Uzbekistan’s application with the European Commission to obtain the status of a GSP + beneficiary.

Great interest from the German side was aroused by the issues of achieving great results in cooperation with the Cotton Campaign coalition and the report of the International Labor Organization on the results of the 2020 harvest, which for the first time confirmed this year the absence of systematic forced labor during the cotton harvest in Uzbekistan. The German side highly appreciated the achievements and asked to send as much information as possible about the situation with the cotton harvest to be presented to German companies.

During the meeting, Dr. Mangold also spoke about the initiative of the European-Uzbek Association for Economic Cooperation (Eurouz), which will serve as a bridge between Uzbek producers and consumers from the European Union. Eurouz is a project of a non-governmental business association representing the interests of the European Business Community in Uzbekistan, headquartered in Brussels. Through the electronic platform, which is being developed by Eurouz, Uzbek manufacturers will be able to present their products on the European market.

Earlier, Dr. Klaus Mangold also met with the President of the country Shavkat Mirziyoyev (2018), as well as Deputy Prime Minister, Minister of Investments and Foreign Trade S. Umurzakov (2020), during which issues of bilateral cooperation with Germany were discussed.

At the end of 2020, Uzbekistan exported products worth more than US$288.0 million to European countries, in particular for the period 2019-2020. export amount exceeded US$14.0 million.