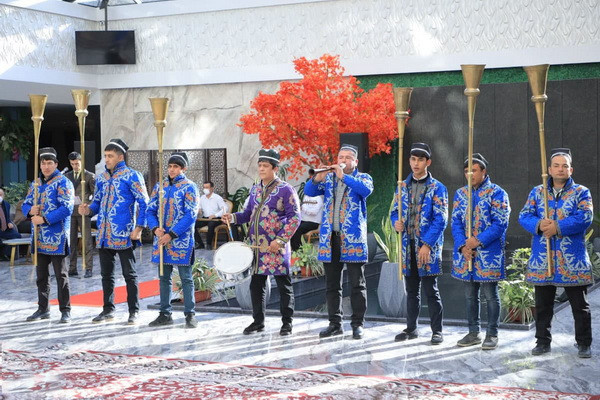 It is organized at the initiative of the Commission on Ensuring Gender Equality of the Republic of Uzbekistan, together with the Uztukimachiliksanoat Association, the Ministry for Support of Mahalla and Family, the Ijtimoy Fikr Public Center and partner organizations.

On the first day of the festival, an exhibition of national clothes created by Bukhara designers and craftsmen was opened. Deputy khokim of Bukhara region Y. Djumaev made a speech, especially noted that in recent years, issues of further improving the status of women in our society, ensuring their active participation in the life of the state and society have been identified as one of the important directions of state policy.

In particular, it was especially emphasized that as the role of women in public life grows, attention to their clothing and appearance increases. Today, time itself requires constant promotion among women of the national and modern style of clothing, corresponding to our mentality.

At a press conference organized with the participation of foreign and Uzbek designers, youth and specialists in this field, the video "Made in Uzbekistan" was shown about the activities of the leading manufacturing enterprises operating in our country.

Also, within the framework of the festival, a training seminar was held on the topic "The culture of women and youth clothing", in which local and foreign experts, leading designers took part with reports on a number of such topical topics as "Fashion and Traditions" and "Image of a modern Uzbek woman through the eyes of leading specialists and Uzbek designers”.

On the same day, a fashion show "The history of Bukhara national clothes" was held. The Ovatsiya Fashion Theater also took part in the festival with its costumes.