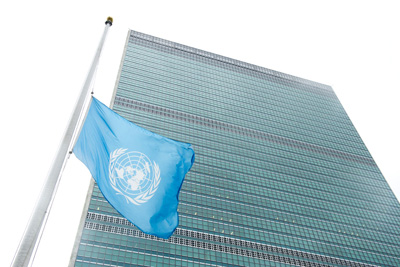 Information on elections in Uzbekistan presented to the UN

Information on elections in Uzbekistan presented to the UN

Tashkent, Uzbekistan (UzDaily.com) -- The analytical information on inter-party competition and pluralism of opinions in Uzbekistan circulated as an official document of the 71st Session of the UN General Assembly, the press service of the Uzbek Foreign Ministry said.

According to the report of the Permanent Mission of Uzbekistan to the UN (New York), the document is translated into all 6 UN official languages: Arabic, Chinese, English, French, Russian and Spanish.

As underlined, the adopted legislation in Uzbekistan is building a party system that serves as a means for citizens’ interests to be conveyed at the national policy level.

The elections for President of the Republic of Uzbekistan are held on 4 December 2016, in accordance with articles 96 and 117 of the Constitution. The elections are organized and conducted by the Central Electoral Commission and by district and local electoral commissions.

Since its independence, Uzbekistan has gradually emerged as a law-based democratic State with a civil society. In this context, a major role is played by creating the necessary conditions for the organization and regular conduct of open and free elections, which are the foundations of modern democracy.

Political forces participating in elections on the basis of their electoral platforms represent a natural process of development and progress. The evolution of a multiparty system in Uzbekistan shows that, at each stage of reform, the process has relied upon the legal framework being established and improved to foster party political activity.

The Constitution of Uzbekistan and the Public Associations Act, the Political Parties Act, the Political Parties (Financing) Act and a number of other legislative instruments adopted under the Constitution have laid a solid legal foundation for the establishment and free development of parties and public associations that express the interests of diverse sectors of the population.

The procedural and institutional framework for parties to engage in political and electoral processes has been gradually and consistently developed. Pursuant to the 2003 and 2008 amendments and additions to the Constitution and the Presidential Elections Act, the Suffrages Guarantees Act, the Oliy Majlis Elections Act and the Act on Elections to Regional, District and Municipal Councils, the Head of State, parliamentary deputies and representatives of local government are elected exclusively on a multiparty basis.

National electoral legislation in Uzbekistan has evolved over time. In 1999 political parties, representatives of local government and citizens’ self-governing bodies were entitled to put forward candidates for election to parliament; in 2004 political parties and action groups had this right; and in 2009 and 2014 only political parties were granted this right. These legislative changes show that the political struggle is reaching a qualitatively new level from election to election, parties are expanding their areas of activity, their authority is increasing in society and, consequently, so is their responsibility to the people and to the country.

Granting only political parties the right to nominate candidates as deputies was another step in democratizing the State and society, shaping the bodies of representative and executive government, developing a multiparty system and strengthening inter-party competition.

The adoption of the Act on strengthening the role of political parties in the renewal and further democratization of State governance and the modernization of the country was of fundamental importance. This clearly defines the status of the parliamentary opposition and safeguards its activities. The Act was the legal basis on which the political parties UzLiDep and Milliy Tiklanish, in 2015, formed the Democratic Bloc, representing the parliamentary majority, for the effective promotion of draft laws to implement their programme objectives. In turn, the People’s Democratic Party of Uzbekistan and the Adolat (Justice) Social Democratic Party of Uzbekistan group announced that they were parties of the minority parliamentary opposition.

The adoption by parliament of a policy outline on further strengthening democratic reforms and the development of civil society in Uzbekistan, elaborated in 2010 by the first President of Uzbekistan, Mr. Islam Karimov, gave a powerful impetus to the development of a multiparty system. On the basis of initiatives laid down in this document, amendments were made to the Constitution whereby the Prime Minister of the country is nominated by the political party that wins the largest number of seats in the Legislative Chamber from the elections, or by several political parties tied for first place in the number of seats won; a new concept was introduced to constitutional law: a motion of no confidence in the Prime Minister; and, in accordance with the amendments to the Political Parties Act of December 2013, the powers were also significantly enhanced of party groups of local kengashes (councils) of people’s deputies.

All of this significantly increased opportunities for political parties, through their representatives in parliament and kengashes (councils) of people’s deputies, to monitor the activities of government bodies and to address the most important socioeconomic development challenges at the regional level and in the country as a whole.

The Act amending and supplementing specific articles of the Constitution of the Republic of Uzbekistan (articles 32, 78, 93, 98, 103 and 117) was of particular importance for the development of a multiparty system and was a logical extension of the democratic constitutional reforms in the country over the last decade.

Public oversight of State bodies was incorporated in the constitutional framework as an important mechanism for the participation of citizens, and thus political parties, in managing the affairs of society and the State. Furthermore, as a result of amendments to the Constitution, the role of political parties in determining specific social, political and economic development priorities was significantly strengthened, and their involvement in carrying out strategic reforms and in modernizing the country was increased.

When a candidacy is being considered and approved in the Oliy Majlis of the Republic of Uzbekistan, crucially, the candidate for the position of Prime Minister must submit a short- and long-term programme of action for the Cabinet of Ministers. This allows the political parties represented in the Legislative Chamber to clearly set out their positions on the Government’s programme for achieving national development milestones, and to determine the programme of action for their participation.

These and other amendments to the Constitution have created genuine conditions for an inter-party contest, a competition of ideas and programmes, and the development of the multiparty system as a whole. Today, every party must provide the electorate with a clear and understandable programme of action to address the challenges facing society and, through their deputies as representatives, must take an active part in the shaping of government agencies. Only a political party, position and programme gaining the support of the electorate has a rightful place in the political system of Uzbekistan.

In this way, legislation is building a party system that serves as a means for citizens’ interests to be conveyed at the national policy level.

Full compliance with national legislation during the election campaign and a demonstration of proactive and political positions by political parties and all citizens will contribute to the successful holding of elections for President of the Republic of Uzbekistan, in full accordance with democratic principles.