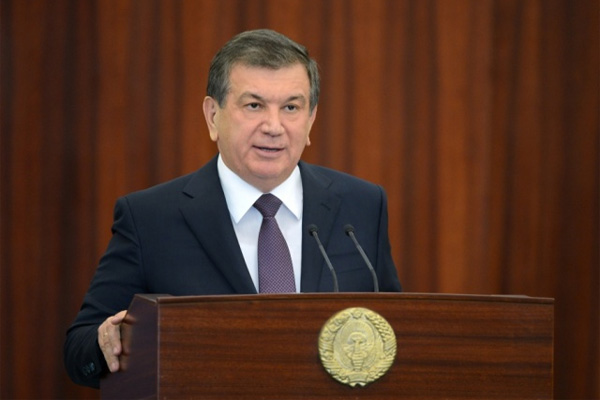 Tashkent, Uzbekistan (UzDaily.com) -- The candidate for President of the Republic of Uzbekistan from the movement of entrepreneurs and businessmen – the Uzbekistan Liberal-Democratic Party (UzLiDeP), Shavkat Mirziyoyev, met voters of Surkhondaryo Region on 15 November.

The meeting was opened by the candidate’s authorised representative, A.Toshkulov.

As a result of large-scale reforms implemented under the leadership of Uzbekistan’s First President Islam Karimov, Surkhondaryo Region is developing consistently as are all the other regions of the country. This is evident in a 9.4 per cent increase in the gross regional product in the first nine months of this year. Thanks to the modernization and diversification of the economy, the region’s industry is developing, and new modern enterprises are being established in its districts. As a result of broad support for the small business and private entrepreneurship sector, its share in the region’s economy is rising. New apartment houses and trade and services facilities are being built in the region’s towns and villages.

The programme specifies such priority tasks as consistently continuing the large-scale reforms started by the country’s First President, improving the system of state and public administration, implementing the idea “From a strong state to a strong civil society”, building a law-governed democratic state and strong civil society, strengthening the role of the Oliy Majlis (parliament) of the Republic of Uzbekistan in the state power system, strengthening the multi-party system and creating an effective system for the training of honest and responsible personnel loyal to the Motherland, capable of independent thought with a new way of thinking and initiative as well as knowledge about advanced methods of management.

Special attention is also paid to such issues as further strengthening macro-economic stability, further raising economic growth rates, ensuring the national currency’s stability and prices on the domestic market, increasing the competitiveness of the country’s economy on the world market, the modernization and diversification of the sectors and branches of the economy, expanding its export potential, increasing its investment attractiveness, implementing a range of measures to reduce the state’s share in the economy, developing and protecting private ownership, further reinforcing the supremacy of law, developing the social sphere and strengthening peace and stability in the country.

The meeting was held in the format of video conference. Voters who gathered in Termez and all the district centres of the region expressed their opinions on the electoral programme of the candidate.

A labour veteran, H.Tangriyev; a people’s poet of Uzbekistan, S.Sayyid; the chairman of the Kyzyrik District department of the Nuroniy foundation Y.Beknazarov; a folksinger, S.Shoydilov; a labour veteran, H.Toshboyev; the chief of the Mehnat Farovon Hayot farm in Denau District, A.Norboyev; a teacher of the Angor services vocational college, G.Karimov; and others have said that the implementation of the tasks specified in the programme will serve for the further development of the country and the raising of the people’s wellbeing. These people called on voters to take an active part in the forthcoming 4 December elections of President of the Republic of Uzbekistan.