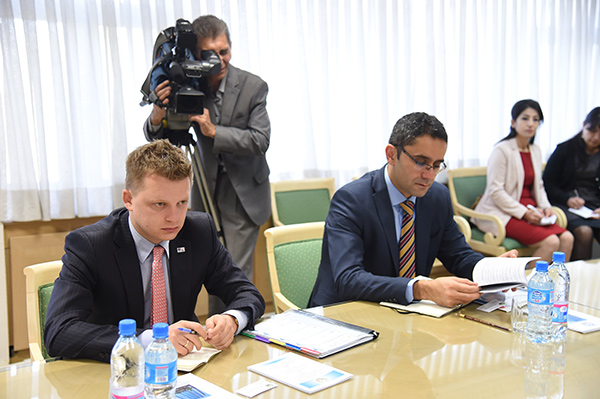 Tashkent, Uzbekistan (UzDaily.com) -- Experts of the Needs Assessment Mission of the Office for Democratic Institutions and Human Rights of the Organization for Security and Cooperation in Europe (OSCE ODIHR), headed by the Head of Election Department Alexander Shlyk visited Uzbekistan.

The visit was organized in line with the invitation of the Central Election Commission of Uzbekistan to participate in the presidential elections of Uzbekistan as observers.

The mission was aimed at assessment of pre-election situation and process of preparation to elections, as well as familiarize with work of election commission and the state bodies, analyze national election legislation of Uzbekistan, etc.

The mission met with the chairperson of the Central Election Commission (CEC) Mirzo-Ulugbek Abdusalomov. The Uzbek side informed the guests on preparations to the presidential elections, scheduled for 4 December 2016.

The mission also held meetings at Senate and Legislative Chamber of Oliy Majlis of Uzbekistan, as well as political parties. The sides discussed reforms in electoral system of Uzbekistan.

In particular, it was noted that Uzbekistan cut number of necessary signatures in support of the candidacy from 5% to 1% from total number of voters. Now, citizens of Uzbekistan can cast early votes thanks to amendments to legislation.

Uzbekistan also introduced changes to the legislation, which set new forms and methods of pre-election campaigns, providing equal opportunities to candidates in the election campaign.

Specialists of Independent Institute of monitoring formation of civil society also informed the OSCE mission about monitoring of election process.

The OSCE ODIHR mission completed its visit to Uzbekistan. They studied national legislation, pre-election situation in the country. The experts adopted decision on format, length of the mission and number of observers.