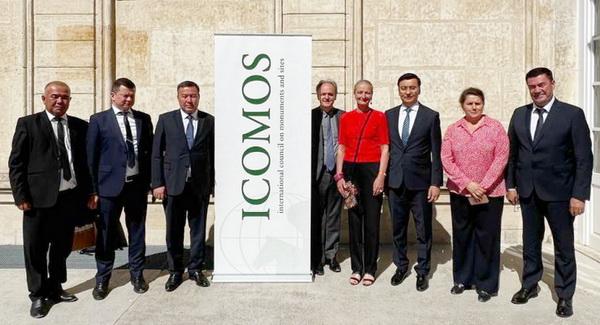 Tashkent, Uzbekistan (UzDaily.com) -- During the stay in Paris of the delegation of the Republic of Uzbekistan, headed by the Deputy Khokim of Kashkadarya region Rustam Yuldashev, a meeting was organized with the Director General of the International Council for the Preservation of Monuments and Sites (ICOMOS) Marie-Laure Lavenir and Director of the ICOMOS Consulting and Monitoring Department R. Durigello.

Marie-Laure Lavenir welcomed the commitment of the Government of Uzbekistan to the fulfillment of obligations under the 1972 Convention on the Protection of the World Cultural and Natural Heritage. Particularly noted were the measures taken in recent years under the leadership of the President of the Republic of Uzbekistan Shavkat Mirziyoyev to protect, increase and promote world heritage sites.

The Director General showed considerable interest in further expanding cooperation with Uzbekistan both through UNESCO, given that ICOMOS is an advisory body, and on a bilateral basis. As she noted, ICOMOS is also ready to make a significant expert contribution to the work of the International Advisory Committee (IAC) on the conservation and restoration of world heritage sites, created on the initiative of the President of the Republic of Uzbekistan Shavkat Mirziyoyev.

The Uzbek side held a detailed presentation of the large-scale measures taken by the Government of the Republic of Uzbekistan to protect and promote the country’s world heritage sites, including in the city of Shakhrisabz.