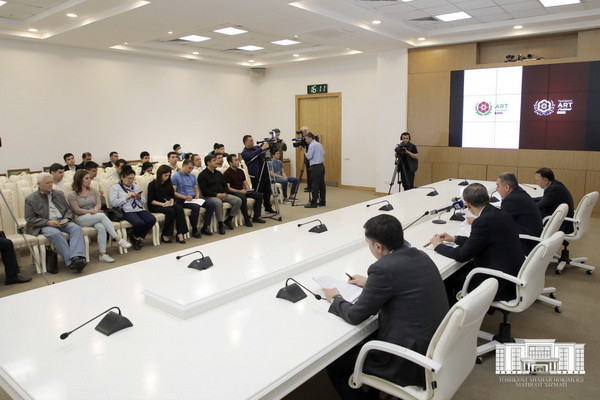 Tashkent, Uzbekistan (UzDaily.com) -- On 20 April, a press conference was held at the Tashkent city administration on the program of upcoming festivals and holidays planned at various venues in Tashkent this summer.

In May-July, a number of large-scale public events are planned to be held in Tashkent, including:

- Tashkent Flower Festival 2022 under the motto "Tashkent loves you" will be held on 6-8 May on the square in front of the A. Navoi National Library. Among the participants are leading floristic companies: Fiori, Floreal, Flowers.uz, "Toshkent gullari", "Poytakht nastarin gullari", Flowers garden and others.

- Tashkent Opera Festival 2022 is scheduled to be held on 8-29 May at various venues in the city: the squares in front of the A. Navoi National Library and the A. Navoi Bolshoi Theater, in the Yangi Uzbekiston park, at international and local airports, at metro stations, summer areas of restaurants and squares of the capital.

- Tashkent Art Festival 2022 will be held on 6-12 June. The main goal of the organizers of the art festival is to increase the interest of residents in culture and fine arts, to fully support and develop the talents and abilities of young amateurs and professionals, to create the necessary conditions for their free creative implementation.

- Tashkent Food Festival 2022 (Tashkent gastronomic festival) will be held on 17-19 June in the Yangi Uzbekiston park. The festival is aimed at the development of gastronomic tourism by presenting the national cuisine and promoting the values of the people of Uzbekistan.

- Tashkent Music Festival 2022 will be held at the Friendship of Peoples Square on  15-17  June. Among the participants are internationally recognized stars and well-known DJs. Meetings of stars with fans are planned.

- Tashkent Ice cream Festival 2022 will be held on 22-24 July in parks and squares of Tashkent. In the hottest summer time, the event will give the residents of the city not only coolness, but also a great mood.

It is expected that the total coverage of large-scale city events will exceed 3 million people, including our compatriots and foreign guests.