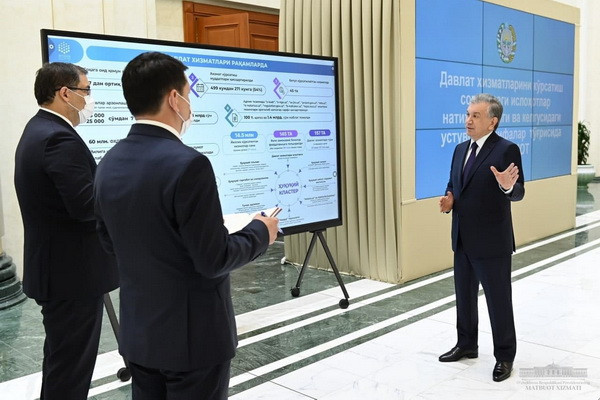 Effectiveness of reforms in public services presented to Uzbek leader

Effectiveness of reforms in public services presented to Uzbek leader

Tashkent, Uzbekistan (UzDaily.com) -- On 10 May, President of Uzbekistan Shavkat Mirziyoyev became familiar with the presentation on the effectiveness of reforms in public services.

Following the Presidential Decree, the Public Services Agency under the Ministry of Justice of the Republic of Uzbekistan was established, which started operating on April 1, 2018, based on a new concept. The agency's system constantly improved, and the scope of service expanded.

In particular, if at the initial stage the list of public services provided by the agency consisted of 37 items, today their number has reached 157. Every day, citizens receive an average of 57 thousand services.

145 new buildings of public service centers and 115 branches of the agency were built in the regions. 60 million paper data in the archives of civil status acts were fully digitized.

However, some problems are holding back the increase in coverage and speed of service. Thus, only 11 percent of services are provided electronically, as the required data set remains not digitized. A total of 30 types of services are available in the mobile application of the Unified Portal of Interactive Public Services. Of these, only 11 are interactive. The electronic identification system and the electronic digital signature are not widely used.

These and other issues, as well as ways to solve them, were discussed during the presentation. The Head of the state identified priorities for further development of the sphere and improving the convenience and accessibility of services for the population.

Based on foreign experience, we will have to increase the number of services to 200 by the end of this year. Instruction was given to conduct an inventory of all 716 public services, reduce the time and the cost, simplify the conditions and requirements for their provision.

“The provision of services to the population by state agencies is one of the foundations for achieving people's satisfaction. It is necessary to create conditions based on what services are needed in villages and mahallas. It is necessary to analyze which services can be made cheaper, which can be made free of charge, and to increase their convenience and accessibility on this basis”, Shavkat Mirziyoyev said.

The need was noted for increasing the degree of interdepartmental integration, for which 20 percent of the funds received from the provision of public services should be directed to the development of the information technology system of organizations, the digitalization of archival documents.

Measures have been identified to improve the work with electronic digital signatures, develop the mobile application of the Single Portal for Interactive Public Services, and introduce discounts for people with disabilities.