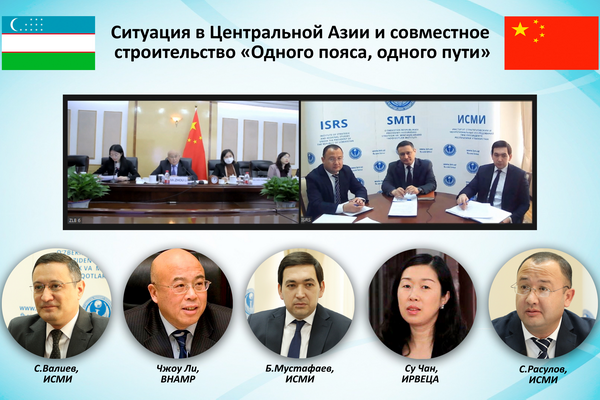 Ambassador Zhou Li: Central Asia is the first destination for Chinese investment under the OBOR initiative

Ambassador Zhou Li: Central Asia is the first destination for Chinese investment under the OBOR initiative

Tashkent, Uzbekistan (UzDaily.com) – On 30 November 2020, an online conference was held on the topic "The situation in Central Asia and the joint construction of “One Belt, One Road”.

As part of the event, organized by the Institute for Strategic and Interregional Studies under the President of the Republic of Uzbekistan in conjunction with the All China People’s Association for Peace and Disarmament, experts analyzed the current situation in Central Asia and the role of China’s Belt and Road Initiative in expanding regional cooperation.

Opening the online dialogue, the deputy director of Institute for Strategic and Regional Studies (ISMI) Sanjar Valiev noted that the videoconference is being held at a time when the demand for such platforms as the Belt and Road Initiative is increasing to restore trade, economic and other ties between the countries involved in this project in the East and the West of the continent.

As the expert emphasized, consistently supporting the Belt and Road initiative, President of the Republic of Uzbekistan Shavkat Mirziyoyev, at the invitation of the President of the People’s Republic of China Xi Jinping, took part in the opening ceremony of the Third China International Exhibition of Imported Goods. Speaking at this large-scale event, the head of Uzbekistan presented the achievements in the liberalization of the national economy, including the foreign trade regime.

Valiyev highlighted the policy pursued by Uzbekistan to reduce raw material exports, diversify and increase the production of products with high added value, the accelerated industrial development of the country.

Given that the key issue on the global agenda is the situation with the COVID-19 pandemic, the Chinese side was presented with a number of proposals from Uzbekistan on cooperation in the medical field and countering epidemiological threats of a cross-border nature.

In support of Uzbekistan’s vision and approaches, Ambassador Zhou Li, vice president of the All-China People’s Association for Peace and Disarmament, stressed that the Central Asian region is the first destination for Chinese investment under the OBOR initiative.

The Chinese diplomat stated that Beijing highly appreciates the active participation of Uzbekistan in the activities of such institutions as the SCO and the Belt and Road Initiative. Uzbekistan’s new "open" approach to cooperation contributes to the intensification of multilateral interaction in the region, making a significant contribution to strengthening mutual trust.

The head of the ISMI Center, Bakhtiyor Mustafayev, focused on a noticeable improvement in the situation in Central Asia thanks to the new regional policy of Uzbekistan. He pointed to the strengthening of political trust and the formation of a completely new situation in Central Asia, which contributed to a manifold increase in the volume of trade, investment and cultural and humanitarian ties between the countries of the region. The expert stressed that this creates unprecedented conditions for ensuring security and stable development of the countries of Central Asia.

Su Chan, a researcher at the Institute for Russian, Eastern Europe and Central Asia Studies of the PRC, positively assessed the situation in the region as contributing to the improvement of the investment attractiveness of the Central Asian countries. According to her estimates, the new policy of the President of Uzbekistan Shavkat Mirziyoyev has withstood a serious test during a pandemic. The country has demonstrated high resilience and stability even during a severe coronavirus outbreak. This became a convincing confirmation of the effectiveness of the policy of the “new” Uzbekistan.

Pointing to the similarity of the development strategies of Uzbekistan and China, the expert noted the potential for expanding cooperation in such priority areas as the digitalization of the economy, the development of industry and agriculture.

The head of the ISMI department, Sadullo Rasulov, separately dwelt on the priority areas of interaction within the framework of the OBOR. He stressed that Uzbekistan stands for the development of a "green economy", the promotion of "smart agriculture" and the creation of a joint center of agro-innovation in order to introduce modern technologies and advanced solutions aimed at achieving food security.

As the expert noted, within the framework of the OBOR, Tashkent is interested in the maximum disclosure of the transport and transit potential of Central Asia and the formation of the economic corridor "China - Central Asia - West Asia".

In order to ensure guaranteed financing of OBOR projects in the region, he recalled the proposal of Uzbekistan to create a "Financial Dialogue for Central Asia and Afghanistan" with the participation of international development institutions and partner states.

As a result of the discussion, the experts agreed that for the successful implementation of OBOR projects and the identification of unrealized potential, intellectual support and strengthening of cooperation between research centers of Uzbekistan and China becomes in demand. In this context, the parties reached an agreement to continue the practice of conducting online discussions and joint case studies on topical issues of bilateral and multilateral cooperation between Uzbekistan and China.