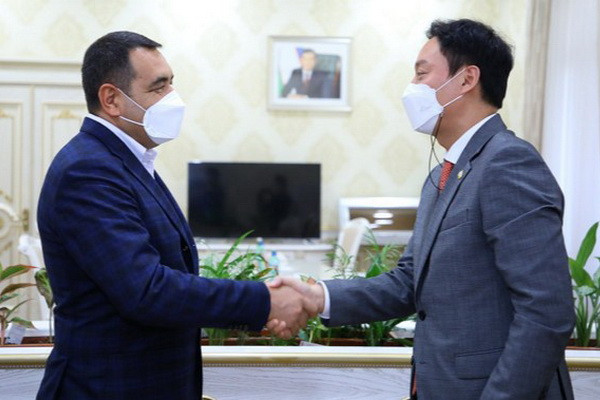 Tashkent, Uzbekistan (UzDaily.com) -- At the invitation of the khokim of Namangan region Khayrullo Bozarov, the Embassy of Uzbekistan  in Seoul organized a visit of a delegation headed by First Deputy Chairman of the Korean-Uzbek Business Association under the Ministry of Trade, Industry and Energy of the Republic of Korea Kim Chang Keon to the region to discuss accelerating the implementation of joint investment projects.

Today, on 22 September, in the city of Namangan, a meeting was held between Kim Chang Keon and the regional governor Khairullo Bozarov, Dunyo news agency reports.

The negotiations were also attended by the executive vice president for the automotive business of Evergreen Motors Kim Ik Dong, the heads of the Hyundai Motors UZ Namangan joint venture Kim Yong Chol and the representative office of the Korean-Uzbek Business Association in Uzbekistan Yun Joon Sok, as well as those responsible employees of the regional administration.

They discussed and reached agreements on further practical stages of the project for the construction of a plant for the production of commercial vehicles "Hyundai" in the territory of the free economic zone "Namangan". It was noted that the project is scheduled to begin by the end of October 2020 as the South Korean company Hyundai Motors decides the technical parameters of the investment project.

Also, a visit to the territory allocated for the automobile plant in the FEZ "Namangan" was carried out to get acquainted with the plans for the construction of the facility. In addition, an exchange of views was held on promising joint projects aimed at localizing parts and components for commercial vehicles, including with the involvement of member companies of the Korean-Uzbek Business Association.

The visit of the South Korean delegation to Uzbekistan continues.