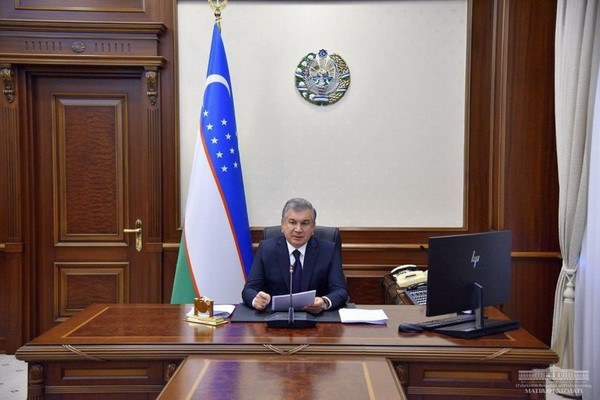 Tashkent, Uzbekistan (UzDaily.com) -- On 16 September, President Shavkat Mirziyoyev chaired a video session on measures for the introduction of water-saving technologies and the implementation of public-private partnership projects in water management.

In our region, water shortage has been gaining in significance. Over the past 10 years, the volume of water resources in Uzbekistan, for example, has decreased by 12%, and by 15% this year compared to last year.

The level of energy and water consumption is rather high in growing cotton and grain crops. In particular, 8 billion kilowatt-hours of power and 2.4 trillion soums of budgetary funds are spent annually to ensure the operation of more than 5 thousand pumps for irrigation of 2.5 million hectares of land. An average of 800 thousand soums is spent for the supply of water by pumps per hectare of land. As a result of furrow irrigation, about 5-6 billion cubic meters or 20% of water is lost in the fields every year.

In these circumstances, water saving and accounting gain in extreme significance. Over the past two years, the President and the government have adopted 11 resolutions in this area, and everything conducive for proper operation of the water industry have been delivered.

Nevertheless, the efforts undertaken so far, as it was noted at the meeting, are still far from satisfactory. Thus, water-saving technologies have been introduced only on 285 thousand hectares, which is 7% of the land. In this regard, the lags are especially noticeable in the Kashkadarya, Bukhara and Khorezm regions. Furkat, Buka, Chinaz, Sardoba, Takhtakupyr, Karauzak, Kasbi, Kyzyryk, Muzrabat districts have not seen a single water saving project implemented.

Therefore, the state of affairs in water resources management in Karakalpakstan, regions and in the context of districts was critically analyzed at the meeting, so were the urgent tasks to address the situation. The President urged, for instance, to expand the area of land with water-saving technologies next year to cover 600 thousand hectares. Directives were voiced on the allocation of necessary funds from the national budget for these purposes, on the provision of subsidies to cover part of the expenses of entrepreneurs, as well as the assignment of loans to farms and clusters through commercial banks with the use of funds from international financial institutions.

The widespread introduction of water-saving technologies will lead to growth in demand for them. Yet the capacities of 13 companies manufacturing such equipment in our country will barely be enough to cover even half of the demand projected for the next year. To this end, responsible executives were tasked with creating such enterprises in Samarkand, Tashkent and Namangan regions.

Thanks to an innovative solution in the sector, the laser leveling of the land, the clusters have managed, when cultivating more than 3 thousand hectares of lands, to cut water consumption by 20-25%, reduce application of fertilizers by 15%, and increase yields by at least 10%. The head of state stressed the importance of spreading this experience, laser leveling of cotton, grain and rice fields. The Ministry of Finance was instructed to assign at least 250 billion soums of loans from the Agricultural Development Fund for the introduction of such technology.

This year, water facilities in Kuyichirchik, Narpai, Bulungur, Sardoba, Nishan, Kasbi districts were given to entrepreneurs on principles of public-private partnership, and a standard project is under implementation. That would allow for the modernization of facilities and significantly lessen operating costs. The President instructed to implement similar schemes in other districts, too.

Another challenge that hinders the rational use of water is that today only 2% of more than 3 thousand water metering stations and 2.5% of 400 major water structures are outfitted with automated control systems. In this respect, the Ministry of Water Resources was instructed to introduce an automated system for monitoring water in real time mode at 150 posts by the end of this year and in all posts starting from next year.

Earlier this year, water tax benefits for agricultural enterprises were canceled. In the meantime, the tax rate for water use has been reduced by 50%. The President stressed the need to uphold this abridged rate next year.

Shavkat Mirziyoyev outlined tasks for bringing the methodology for calculating irrigation rates in line with requirements of the United Nations Food and Agriculture Organization (FAO), for stimulating consumers who have installed water meters.

The head of our state urged Uzbekbaliksanoat Association to develop fish farming in collector waters.

Instructions also included those to expand hydrogeological exploration based on the Namangan practice and effectively use underground water resources.

Special attention at the meeting was paid to the development of science and education in the field of water management.

The President pointed out that it is important to engage the scholarly community in the construction and reconstruction of irrigation and reclamation facilities. The scientists will participate in the entire process from the elaboration of pre-project documentation for facilities through to their commissioning, and provide academic and technical support for construction works. Integration of science and practice will allow for more thorough project development.

Heads of ministries and agencies in charge, hokims of regions and districts reported on issues discussed at the video session.