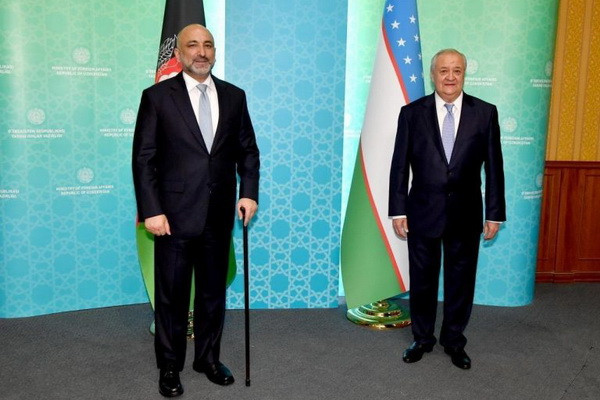 Tashkent, Uzbekistan (UzDaily.com) -- The first visit of Hanif Atmar as head of the Foreign Ministry of Afghanistan to Uzbekistan on 27-28 August 2020 was widely covered in leading Afghan and Pakistani publications.

In particular, leading news outlets such as Tolo News, Ariana News, Afghanistan Times and the Islamabad Post have drawn particular attention to the comprehensively evolving nature of comprehensive cooperation between Uzbekistan and Afghanistan.

The materials indicate the mutual commitment of Tashkent and Kabul to the expansion of interstate relations, as well as the intention of the parties to use the vast potential to strengthen bilateral cooperation in the political, trade, economic, energy, transport and communication and other spheres.

Observers of the Afghan publication Ariana News highly appreciate the results of the talks between the foreign ministers of Uzbekistan and Afghanistan, primarily pointing to an agreement on the supply of electricity from Uzbekistan to Afghanistan. It is noted that the Uzbek side has documented its readiness to supply electricity to Afghanistan for 10 years until 2030.

According to Afghan experts, this is evidence of Uzbekistan's strong commitment to providing sincere support and assistance to Afghanistan in the reconstruction and development of the national economy affected by the long-term war.

Observers note that accelerating the construction of the Surkhan-Puli-Khumri transmission line will certainly contribute to strengthening cooperation between the parties in the energy sector. At the same time, the publication believes that this project will allow Afghanistan to largely solve the problem of lack of electricity for the next decade.

In turn, the Pakistani edition of Islamabad Post indicates the relevance of promoting joint transport projects between Uzbekistan and Afghanistan, which will contribute to the development of trans-regional connectivity.

In this regard, observers of the Pakistani newspaper welcomed that in the course of bilateral discussions, the parties paid special attention to the development of transport corridors through the implementation of joint railway projects. At the same time, the publication separately highlighted that following the negotiations, Tashkent and Kabul agreed and initialed a draft agreement between Uzbekistan and Afghanistan on international road traffic.

Commenting on the visit of Afghan Foreign Minister H. Atmar to Tashkent, the popular Afghan news web portal Tolo News emphasizes that Uzbekistan's comprehensive approach to promoting the peace process and the efforts of Uzbek diplomacy to promote peace and stability in Afghanistan fully contribute to the expansion and deepening of mutual understanding between Kabul and Tashkent.

According to Afghanistan Times, unequivocal evidence of this is that during the visit H. Atmar thanked Uzbekistan for supporting the peace process and the position of the government of the Islamic Republic of Afghanistan.

At the same time, as the Afghan newspaper notes, H. Atmar assured the Minister of Foreign Affairs of Uzbekistan A. Kamilov that the Afghan leadership is determined to strengthen and expand relations with Uzbekistan, improve political, economic and cultural relations with a friendly neighboring country.