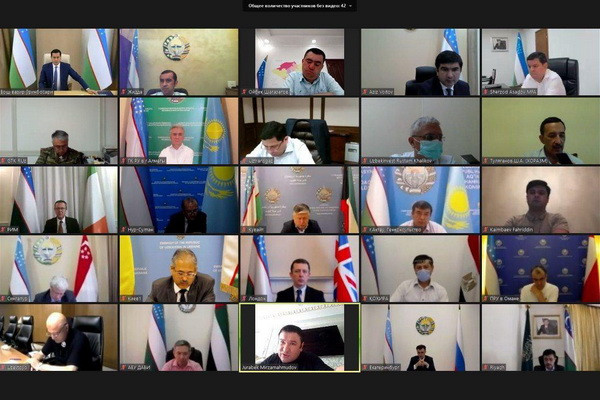 Tashkent, Uzbekistan (UzDaily.com) -- On 7 August 2020, under the leadership of Deputy Prime Minister of the Republic of Uzbekistan Sardor Umurzakov, a video conference was held to discuss the implementation of measures to provide comprehensive support to entrepreneurs and exporters of the republic, to take measures to increase exports domestic products, taking into account the current situation in world markets, as well as the implementation of regional programs for the socio-economic development of the Republic of Karakalpakstan and Khorezm region.

The results of the work carried out in January-July 2020 to increase export volumes, including the measures taken to replenish the working capital of exporting enterprises, return to them previously paid amounts of value added tax, as well as the effectiveness of the activities of diplomatic missions of Uzbekistan abroad in promotion of the export potential of the republic, search for new customers for domestic products and assistance in the implementation of export agreements.

During the meeting, it was emphasized that at the moment, modern effective mechanisms of production and trade in goods in a pandemic have already been introduced into world practice, which has a positive impact on the restoration of the world economy and the intensification of international economic relations. In this regard, it was pointed out the need for systematic work of the relevant structures and bodies to use all available reserves to increase export volumes.

It was pointed to the growing demand for a number of commodity items in the markets of the CIS countries and neighboring countries, as well as to the projected rise in prices for certain types of domestic products, which together form favorable conditions for a targeted increase in production and exports in the indicated directions.

Special attention was paid to measures to intensify the work of the Republican headquarters for supporting exporters, which consists in identifying existing issues of exporting enterprises, taking prompt measures to resolve them, determining the needs of entrepreneurs in additional credit resources or returning previously paid amounts of value added tax. At the same time, it was pointed out the need for domestic enterprises to comply with payment discipline, in connection with which the task was set to liquidate existing overdue accounts receivable under current export contracts as soon as possible.

As a matter of priority, the progress in the implementation of previously given instructions for the implementation of regional investment programs in the Republic of Karakalpakstan and Khorezm region was considered: projects being implemented with a lag behind plans were identified; the factors that impede the timely performance of work have been studied; instructions were given to promptly resolve existing issues. The importance of work on the timely connection of industrial facilities under construction to utilities, the unhindered issuance of permits by the relevant state bodies, as well as comprehensive assistance in the successful launch and operation of the created enterprises was emphasized.

The measures taken to create “Project Factories” in these regions were critically assessed, in connection with which the responsible leaders were instructed to complete the construction of premises as soon as possible and resolve organizational issues.

As a result of the meeting, the responsible heads of ministries and departments were assigned specific tasks with the definition of deadlines and expected results. Monitoring of the timely and high-quality execution of orders will be carried out by the General Prosecutor’s Office of the Republic of Uzbekistan.