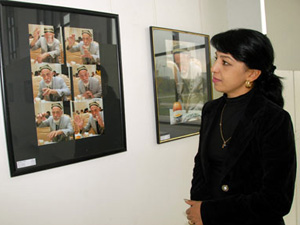 Tashkent, Uzbekistan (UzDaily.com) -- Opening ceremony of Egyptian Culture Days took place at Tashkent’s Centre of National Arts on 24 March. The cultural event has been organized by the Embassy of Egypt in Uzbekistan, Egyptian Culture Centre, Ministry of Culture and Sports Affairs of Uzbekistan and the Fund Forum.

The opening ceremony included a performance by ensemble Nile from Egypt and music numbers by Uzbek singers and members of the Egyptian Culture Centre. The event guests had a chance to visit an arts exhibition “Egypt Throughout Centuries”, which was composed of exhibits depicting pharaohs’, Copts’ and Islamic civilizations in one of the world’s oldest countries. The exhibition presented calligraphic works created by Egyptian calligrapher Yusri al-Mamluk.

The Egyptian Culture Days will last till 29 March 2010. It will be attended by leading culture and arts professionals from Egypt, folk performers, artists and diplomats of the two countries as well as the broad public. The Culture Week events will be held at Tashkent higher educational institutions, Gafur Gulam Park, Youth Creativity Palace, Conservatory, and the Egyptian Culture Centre.

It is noteworthy that the Egyptian Culture Week has been held regularly in Tashkent since 2007. The joint performances by Egypt’s Al-Hurriya ensemble and Ofarin dance theatre drew loud applause. Also, of note are the exhibitions of Egyptian artists Said Ibrahim, Muhammad Kandil, lectures delivered by calligrapher and professor Avs El-Ansari, dean of Cairo University’s Historical Monuments School Ula Alijizi and the Arabic language contest. The Fund Forum provides support in this project regularly, which has become another important step in the development of cultural and humanitarian ties between the two nations.