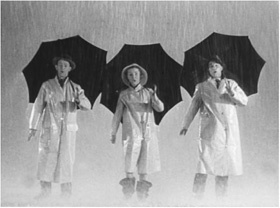 Singin’ in the Rain

The American Film Festival to be held this week

Tashkent, Uzbekistan (UzDaily.com) -- American movies with themes ranging from cowboys riding the desert Southwest to love in the big city will be shown during the second annual American Film Festival from 6 to 8 November in Tashkent.

The Film Festival is being hosted by the US Embassy in Tashkent with the support of the Council of Friendship Societies of Uzbekistan. The public is invited to attend each of the seven movies, which will be screened in English, with two of the movies having Russian subtitles. Admission is free of charge.

Each of the films was selected to show a wide range of the traditions and culture of the United States. They include a classic musical, a blockbuster thriller and a children’s cartoon, among others. Staff of the Embassy will lead discussions before each film and give out prizes such as books and DVDs during question-and-answer sessions.

In 2008, the first year of the American Film Festival, nearly 1,000 people came out to view the films. That level of interest led to the idea of making the festival an annual event.

The schedule for this year’s American Film Festival is:

19:00Â  Annie Hall. The 1977 romantic comedy is considered by many to be famous director Woody Allen’s best movie. Its depiction of life and love in New York City won the Academy Award for Best Picture of the Year, the most prestigious award in American filmmaking.

12:00Â  Singin’ in the Rain. The American Film Institute named this 1952 movie starring dancer Gene Kelly the best musical ever made.

15:00 The Sixth Sense. This 1999 supernatural thriller brought fame to writer and director M. Night Shyamalan as it was nominated for six Academy Awards, including Best Picture.

18:00 Some Like It Hot. Marilyn Monroe starred in this classic American comedy from 1959. It will be shown with Russian subtitles.

12:00 A Bug’s Life.Â  This Disney/Pixar film was among the first fully computer-animated movies when it was made in 1998.

15:00Â  3:10 to Yuma. Many critics say this 2007 movie starring Russell Crowe as a resourceful outlaw in the desert Southwest is among the best of the recent Westerns.

18:00 The Shawshank Redemption. This popular 1994 drama set in a maximum-security prison is based on a novella by bestselling author Stephen King. Shown with Russian subtitles.

All of the movies will be shown at the Friendship Societies’ building, the building formerly known as Muzey Kino.