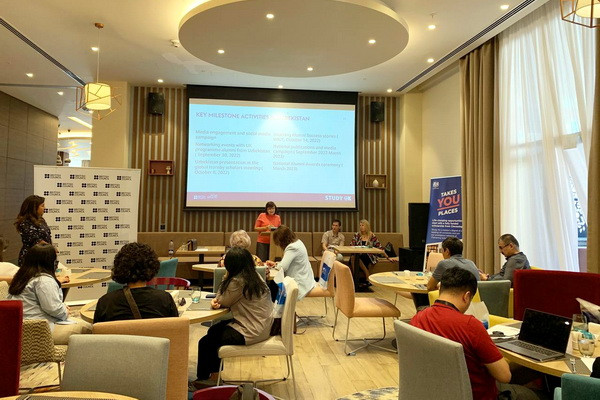 During the press conference, Denise Woddingham, Director of the British Council in Uzbekistan, shared the results of the development of educational programs to improve the practice of teaching and learning English in Uzbekistan.

“We have been operating in Uzbekistan for 26 years, and we are very proud of the results we have achieved. We are actively working together with the government of the Republic of Uzbekistan to improve the curriculum for teaching English in educational institutions of Uzbekistan. We do this through a variety of approaches, most notably assisting teachers who teach English directly. We try to build and improve their teaching skills.” Denise shared. “In particular, we support thousands of Uzbek English learners across the country, support English teachers, and conduct internationally recognized exams.”

“The British Council is implementing a range of education projects including collaborating with the Ministry of Higher and Secondary Education on experience sharing and capacity building in support of reform and quality assurance in higher education. We are doing a lot of work to establish direct partnerships between the universities of Uzbekistan and the UK in the field of creative education and support the development of transnational education. This is the second time we are launching the Alumni Awards program. The UK Alumni Awards tell the success stories of people who are alumni of UK programs, including trans-national programmes."

Every year, on 1 September, the global launch of the international Alumni Awards kicks off, with the aim of supporting outstanding UK university graduates from around the world.

The award participants are professionals in their fields who use their knowledge and experience of studying at a British university for the benefit of the development of their country.

This year, the Alumni Awards will be held in Uzbekistan for the second time. The winners of the national award will be announced in February 2023 in the following categories:

•Award for contribution to science and sustainable development

•Award for contribution to culture and creativity

•Award for contribution to business development and innovation

The four finalists, the winners of the national award in each category, will be shortlisted for the international award, receiving the grand prize of a professional networking trip to the UK and industry recognition, as well as a reward of £1,000.

Alumni Awards is a special competition for UK university graduates who have distinguished themselves for their professional and leadership qualities and achievements in their field of activity and beyond. The award reflects the impact and value of British higher education and raises the international profile of UK university graduates.

The winner of the award in the Business and Innovation nomination was a graduate of the University of Westminster in Tashkent, Khurshid Kadyrov, for his contribution to the development and opening of the Astrum IT Academy. The Business and Innovation Award was given to graduates who actively implement and contribute to the development of innovative and creative projects and solutions in business. The winner in the nomination Social Activity was the leading international expert in the field of oncohematology and sports medicine Sukhrob Saliev. The Social Engagement Award recognizes alumni who have made an exceptional contribution to creating positive social change and conditions to improve the lives of others. The winner in the special nomination "Ambassador’s Choice" was a graduate of the University of Warwick, the founder of the project for the professional development of teachers Eleonora Menglieva.

The British Council invites UK graduates to try their luck by taking part in the Alumni Award. The laureates of the award will have a unique chance to exchange professional contacts at the national and international levels, as well as to expand the circle of like-minded people and increase their international prestige.