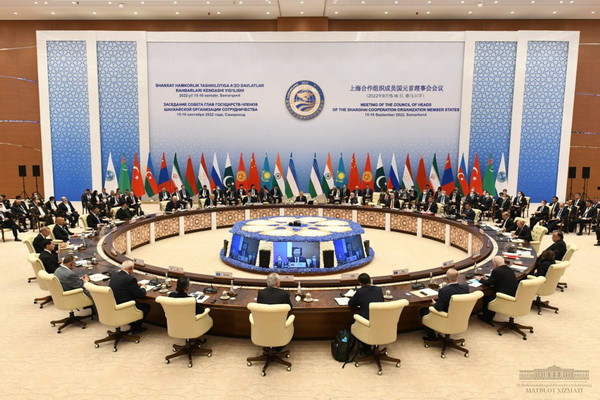 Tashkent, Uzbekistan (UzDaily.com) -- On 29 September, the International Conference "Samarkand SCO Summit: contribution to regional and international security, sustainable development" will be held in a hybrid format in Tashkent.

The Conference plans to bring together more than 30 prominent representatives from among the expert and analytical circles of the SCO member States, as well as a number of foreign countries, including the USA, Belgium, Great Britain, Germany, France, Hungary and other countries.

Foreign participants will be represented by such leading experts as Secretary-General of the China Center for SCO Studies of the Chinese Academy of Social Sciences Deng Hao, Director of the Cambridge Central Asia Forum Siddharth Saxena, President of the Institute for Prospective and Security in Europe Emmanuel Dupuis, Director of the Central Asia-Caucasus Institute Svante Cornell and many others.

The agenda of the event will be devoted to discussing the main results of the SCO summit in Samarkand, as well as issues of further cooperation within the Organization in the field of security, enhancing trade and economic ties, strengthening transport and logistics interconnectedness and strengthening cultural and humanitarian interaction.

Particular attention will be paid to the Samarkand Solidarity Initiative for Common Security and Prosperity, offered by the President of Uzbekistan as part of his speech on the sidelines of the summit.

The experts will have thorough exchange of views on the nature and significance of the initiative and will make recommendations for its operationalization.

In addition, the conceptual documents signed by the heads of the SCO member states will be considered in detail.

These and many other key questions are planned to be considered during the following four thematic sessions of the upcoming conference:

1. Samarkand initiative - a new format of inter-civilizational dialogue of the future;

2. Further prospects for cooperation between the SCO countries in the field of trade and transport and logistics interconnectedness;

3. Topical issues of ensuring security and stability in the SCO space;

4. Strengthening cultural and humanitarian cooperation is a guarantee of friendship, mutual understanding and sustainable development.

Holding the International Conference “Samarkand SCO Summit: Contribution to Regional and International Security, Sustainable Development” will make it possible to comprehensively assess the results of such a significant event and outline prospects for further development of multifaceted cooperation between the SCO member countries in various fields.

On September 15-16, Samarkand hosted the SCO summit, which became the largest and most influential political event in the history of the Organization.

It was attended by leaders of 14 states and heads of 10 international organizations. On the sidelines of the summit, 44 documents were signed, most of which are of a strategically important nature. They determined new vectors of multilateral cooperation of the member countries in the short and medium term.

At the same time, the Samarkand site has become not only the venue for the SCO summit, but also the most important bilateral and trilateral negotiations. During these meetings, key issues of global and regional development were discussed. As a result of the talks, important decisions were made that contributed to the reduction of tension in the region.

The Samarkand summit made an important contribution to the restoration of confidence in the system of international relations and became the so-called starting point for the start of a new stage of interstate and multilateral cooperation based on dialogue and mutual understanding.

As a result, the main document was adopted - the Samarkand Declaration, which reflects the consolidated positions of the countries on the most important regional and global issues.