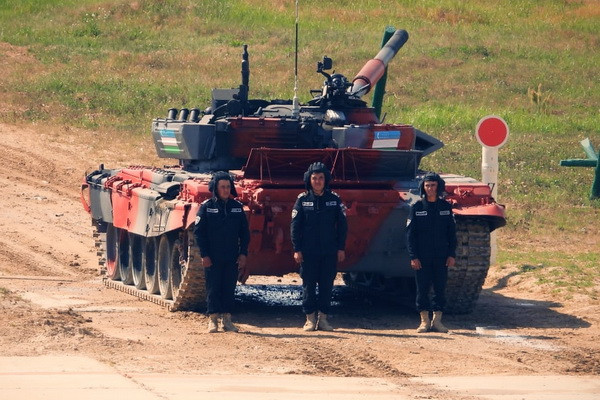 Tashkent, Uzbekistan (UzDaily.com) -- Today, on 13 August, the Tank Biathlon competition of the Vlll International Army Games started at the Alabino training ground in Moscow region of the Russian Federation. In the first division, during the individual race task, our tankers competed with the first crews of teams from Vietnam, Venezuela and Kazakhstan.

According to the terms of the assignment, the crews of tanks on T-72B3 tanks overcame various obstacles and hit the established targets. So, according to the final results of today’s task of one of the most attractive and interesting competitions "Tank Biathlon" of the International Army Games, the tank crew of the Republic of Uzbekistan crossed the finish line with a result of 25 minutes 18 seconds. The Kazakh team completed the task in 25 minutes 57 seconds, the Vietnamese military personnel completed the task in 34 minutes 53 seconds, and the Venezuelan representatives completed the task in 47 minutes 5 seconds.

For reference, in the first division, where our representatives compete, 10 teams are fighting for the championship, these are the teams of Azerbaijan, Belarus, Vietnam, Venezuela, Uzbekistan, Kazakhstan, China, the Kyrgyz Republic, Mongolia and the Russian Federation. The next competitions with the participation of our servicemen will be held on 16 and 20 August.

Today, also, the first stage of the "Field Kitchen" competition to complete the task of fire training was completed at the "Forish" mountain training ground of the Central Military District.

5 teams of military chefs from Uzbekistan, Tajikistan, Russia, Belarus and Vietnam took part in the task. According to the terms of the task "Fire preparation", 6 representatives of each team fired shots at targets set at a distance of 100 m.

As a result of the task, the teams showed the following results: