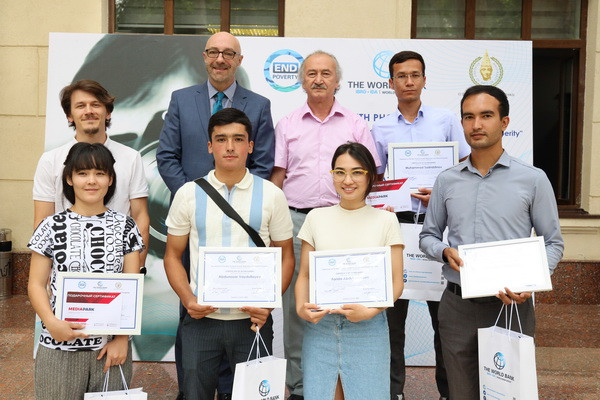 Tashkent, Uzbekistan (UzDaily.com) -- The World Bank (WB) and the Academy of Arts of Uzbekistan announced the results of a joint contest for young photographers focusing on the fight against poverty and issues of social and economic development in the country. Over 170 photos from various regions of Uzbekistan were submitted for the contest jury’s consideration.

In April and May, the WB and the Academy of Arts of Uzbekistan jointly organized a youth photo contest. Its goal is to draw public attention to the issues of combating poverty and social and economic development in the country illustrated through photos.

The contest participants were invited to focus on several priority areas, such as addressing the problems associated with poverty, creating jobs in the private sector, developing human capital, promoting green economic growth, combating the gender gap, stimulating citizen engagement, and so on.

“The topics of the photo contest correspond to the priority areas of the World Bank Group’s new Country Partnership Framework for Uzbekistan for the period of FY2022-2026. Through implementing this document, we will help the government in delivering reforms to build an inclusive market economy, reduce poverty by half by 2026 and join the ranks of upper-middle-income countries by 2030,” said Marco Mantovanelli, World Bank Country Manager for Uzbekistan. “Young photographers were invited to visualize the challenges and opportunities for social and economic development and the fight against poverty in the country. I am grateful to our partners from the Academy of Arts for this creative project stimulating public interest in these topical issues.”

Over 40 amateur and professional photographers took part in the contest. They submitted over 170 photos for the jury’s consideration. Applying the contest requirements, the members of the jury, consisting of representatives of the WB and the Academy of Arts, selected three contest winners and three winners under special categories of the contest.

On June 21, the Academy of Arts hosted an awards ceremony involving Akmal Nuriddinov (Akmal Nur), Chairman of the Academy of Arts Akmal, Marco Mantovanelli, World Bank Country Manager for Uzbekistan, as well as the Academy’s faculty and students. The contest and special categories’ winners got diplomas and valuable prizes.

The contest winners, who took prize-winning places, were the following participants:

1. Madina Ergasheva. She submitted a series of photos dedicated to the difficulties experienced by villagers during cold winter seasons. Her photo story was published by Gazeta.uz in January 2022.

2. Abdunazar Vaybullaev. He submitted a series of photos dedicated to youth in rural areas.

3. Sirojiddin Vohidov. He submitted a series of photos dedicated to the development of cities and national art.

Under the contest’s special categories, the jury also acknowledged the following participants:

1. Yevgeny Sorochin. He submitted a series of photos dedicated to the inhabitants of a large city.

2. Muhammad Sadriddinov. He submitted a series of photos devoted to the work of women in textile enterprises.

3. Farida Abdukarimova. She submitted a series of photos dedicated to mahalla residents.

The photos submitted by the contest and special categories’ winners are available at https://cutt.ly/EKczxve

The photos taken during the awards ceremony are available at https://cutt.ly/7Kck8S1